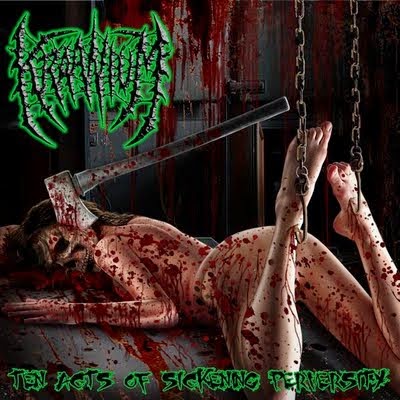 It's pretty wild to think that misogynistic, brutal torture-porn death metal  has become such a familiar and 'safe' territory for some extreme listeners that it has evolved into its own sort of mythology, with its own lyrical and musical standards that are accepted without question. One wonders where the line blurs between what is being projected into the music for pure shock value and what might actually happen behind closed doors if one of the style's performers or fans had the motive or opportunity to fulfill these sick fantasies. I know, I know: it's just entertainment, right? Flying kites is fun, too, but there are a lot less female victims with axes in their heads if you're doing it right. Now, I'm not saying I'm some angel I've been listening to this stuff since Cannibal Corpse popularized it in the late 80s, have covered and therefor aggrandized hundreds of such albums, and even enjoy a few dozen myself, but it still baffles me that the envelope has been pushed so far that most of us treat these images and lyrics with the desensitization we treat slasher films and other extreme media. We're disgusting people, bros

Ten Acts of Sickening Perversity is not something you wanna have in your car stereo on a first date, unless you've successfully picked up George 'Corpsegrinder' at a bar. It's not something you'll want to bring to your next NOW meet-up. No, it's thanatosis in the most puerile form: spasm-inducing chug-centric barbarian slam death with the requisite horror samples uses as intervals to pace out each struggling bowel movement better known as a 'song'. Vocals are malicious pig squeals neutered alongside the groovy pacing of the guitars, which are all more or less paraphrased from various Cannibal Corpse and Suffocation tunes with a degree of low end ballast borrowed from mid-period Morbid Angel records like Domination or Blessed Are the Sick, albeit with more of a knife's edge to the distortion and a dissonant density to various chords that are hammered out in the middle or closure of riffing phrases. The bass is fantastic, scuzzy blood-soaked entrails whipping free from an eviscerate mid-section, coiled and floppy and fluent enough that it becomes apparent the musician actually gives a damn; while the percussion is thick and powerful, loads of thick cymbals and snares crashing alongside the rhythm guitar to give it a far more bouncy, gyrating, sadistic feel for your non stop wigga ninja windmill kickboxing sessions with the homies.

It's tantalizingly brief at around 27 minutes, meaning you could probably listen to this before and after your workday commute, and get revved up with ideas of what you might do to your supervisors that or the next day once they come down on you for micro-management purposes or some lazy breach of protocol on your part. Variation is not a word in the Norwegians' dictionary, but having said that I think they pretty equally distribute the material into its faster and slamming segments to garner appeal from both the moshing crowd and those who want their brutality defined with a little dextrous intensity. The horror bits aren't particularly scary or satisfying in how they introduce individual tracks, but the whole of Ten Acts is violent and visceral enough that the garden variety sociopath who takes this shit with any grain of seriousness will probably spin it with alarming frequency. Personally, I liked the punch and punishment of the album, and that it never hung around enough to wear its welcome thin...just hacking and maiming, and fleeing before the authorities arrive, to ensure that a number of sequels are filmed, each one potentially bloodier than the last. That said, this is largely void of memorable songs, interesting songwriting ideas or anything bordering on essential. You listen to it for the mood and black humor it represents, rather than the strength of individual compositions. Even within this specific niche of death metal there are scores of better albums, but the Kraanium debut is fun and relentless enough that none of those complaints really registers for long.