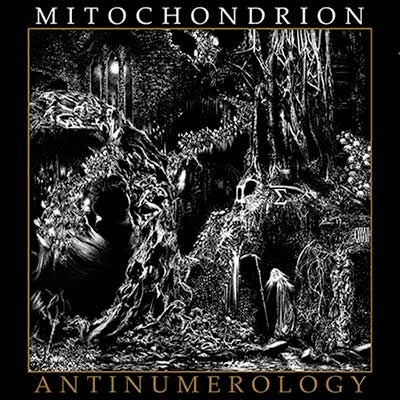 It is the business of Canadians to be dangerous! Never in my wildest imagination could I envision such a friendly place (at least from all my experiences there) harbor such a grotesque extreme metal scene which has churned forth not only the superb Quebecois black metal, and a number of my favorites 80s thrash and speed metal bands, and...Jon Mikl Thor, but also a whole host of black/death and war metal acts. Not all of them are amazing, but they at least make it seem like there's some life left in attempts to bastardize and cross-pollinate genres and produce something worthwhile in all the chaos. Mitochondrion is no exception: their two full-lengths were quality mutations of cavernous death metal and atmospheric black nastiness, and through the Antinumerology EP they give us a hint of our dooms to come, well those of us who weren't already ended by Parasignosis. I was actually slain by that album but have an annoying tendency to brush off the ol' gravedirt and give it another go, eh? EH? See, dangerous.

This is short, tight, visceral, and just about everything you might have dug about the earlier albums albeit the variation and atmosphere might have been curbed at times in favor of incendiary directness, or about as direct as these dissonant blasphemers are going to get. The steady moving molasses of haunted notation and apocryphal, morbid and resonant gutturals is interjected with sequences of blasting excess, vulgar war metal which is so unfriendly as to stain the very fabric of Creation. Blasphemy meets Incantation with a few hints of Deathspell Omega. I felt that not only the compositional choices, but also the mix of this material seemed a little more raw and misshapen than the past albums, and I wouldn't say I favored that change, but at the same time those who were seeking a more angry and violent Mitochondrion will feel as if the mission has been accomplished. There's a strange trend here where as you get into the deeper minutes of content on the B-side, the material becomes more memorably atmospheric, and so I tended to enjoy the creepy title track which closed it out more than the first track "Insummation", but then that is the single most varied piece on the 7" so the mileage may vary.

It's all ugly, but then even the ugly ones need some loving once in awhile, and I don't imagine those cretins and misanthropes who turn to a band like Mitochondrion for consolation from the sanity and structure of the universe will feel highly disappointed with what they've written here. Personally, it's not as effective as hearing one of the full-lengths, because this is not necessarily a band I want to visit briefly...I'm more into full immersion in their disturbed minds, spending time in that uncomfortable universe where the impenetrable blackness between stars is ichor. Fell god-stuff, philosophical ruminations translated through alien minds. The Antinumerology did not sate me as much as listening through a full Mitochondrion record, or one of their foreign analogs like Portal or Impetuous Ritual. But as an horror d'ouvre to bridge the void between the British Columbians' more substantial journeys, this is a respectable, (dis)functional nightmareland.