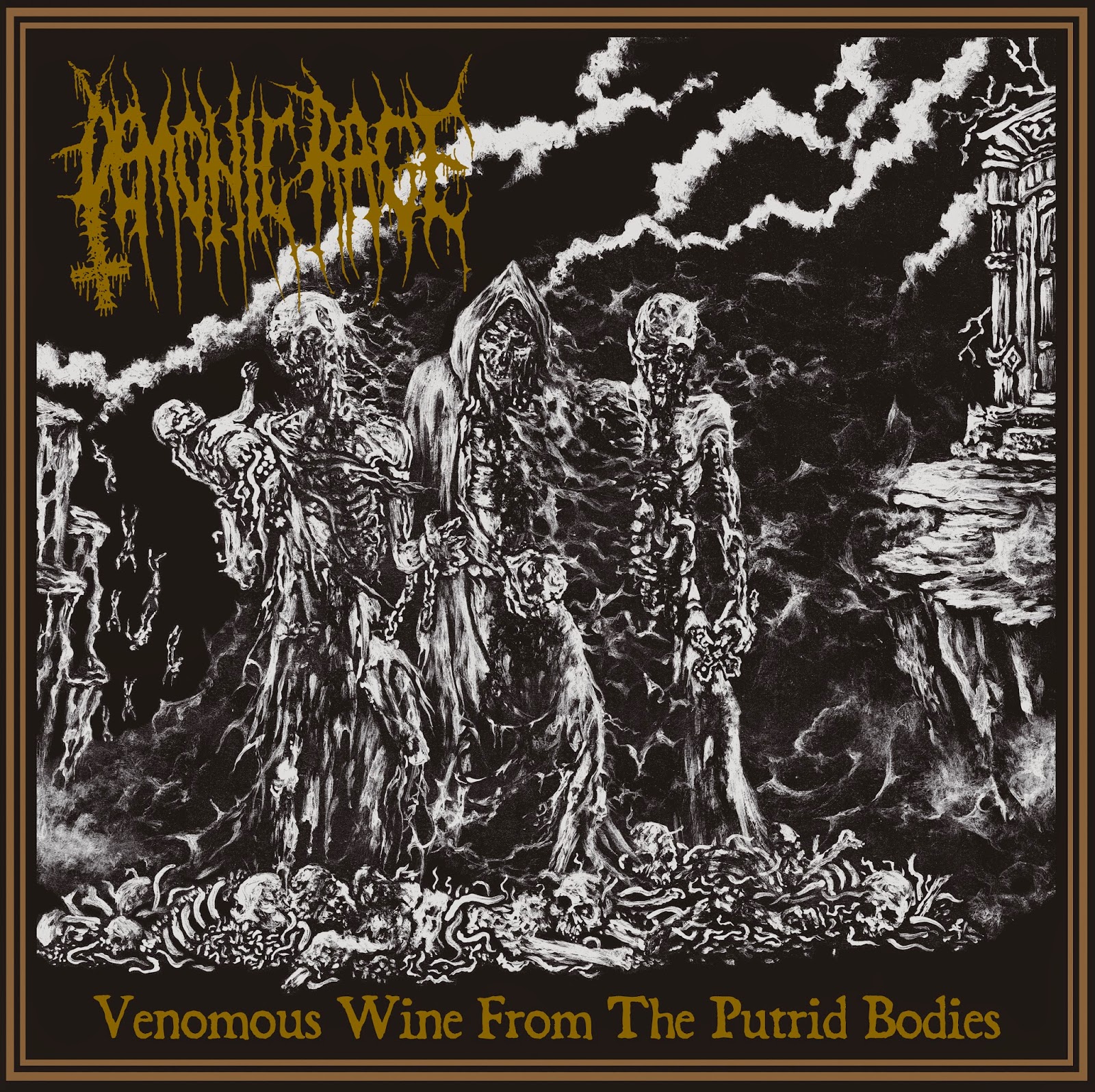 Chile's an interesting scene, because across pretty much all the metal spectrum the bands there seem more intent on capturing the vibes of the old school rather than just aping the latest status quo. Granted, depending on who you ask, nostalgia might very well BE the status quo, but I'm still pretty happy when I hear an album come along that seems like someone threw Pestilence, Immolation and Krisiun in a blender. If that sounds like money to you, Venomous Wine from Putrid Bodies is a no-brainer, because for whatever it lacks in originality it compensates in unrelenting, primal death metal brutality that manages to eschew the overtly reverb soaked cavern core or Swedish doppelganger characteristics.

I believe this was actually released last year by a local label, but now is getting an Iron Bonehead LP reprint, and a good thing because more people craving the 90s death metal should hear it. Churning, low end guitars often take on a sort of Testimony of the Ancients style, but fastened to a more direct guttural vocal style reminiscent of Ross Dolan or Craig Pillard. The kick drums are fairly robotic in tone, giving off that South America/Krisiun post-Floridian vibe where they resemble something Steve Asheim or Malevolent Creation would have played. But then there are a number of slower, tremolo picked rhythms akin to Scream Bloody Gore or Slowly We Rot, and also a number of slightly left of center riffing progressions which aren't unlike what Robert Vigna might have written back on the first couple Immolation discs. Variation isn't legion through these eight cuts, but it is clear that the Chileans know how to put songs together...they mix up the faster, mid-paced and crawling content enough that in 32 minutes, you never really have the chance to be bored.

Venomous Wine from Putrid Bodies is not a classic in the making, if only because the vocals do grow monotonous and the riffs are generally hit or miss, but when I pay attention to the muted tremolo picking phrases here they seem imminently more evil and dangerous than what so many other of these throwback death metal bands emit. The few doomier chord segments are rather forgettable, and there is next to know worthwhile bass presence (the lines are performed by the drummer and guitarist in the studio, which might explain it). Leads are functional and conservative, they seem to get lost against the weight of the rhythm guitars, but at least give the music more body and depth. Really, the central strength of Demonic Rage's sound are those tremolo picked parts which channel most of what I loved about old Death, Gorguts, Obituary, and Pestilence, and the rest of the performance is just solid enough to drive them...it's enough that it looses itself from the middling pack of generic drones, if it could itself still be considered fairly derivative. Still, should the band expand this sound to a higher level of atmosphere, with nastier sounding drums, better leads, and more corpulent and compelling bass guitar, they could have a bright...err gloomy future.