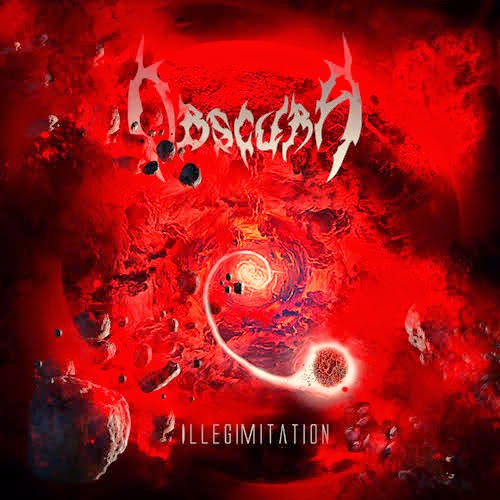 Illegitimation shouldn't really be viewed as a comprehensive collection of Obscura's odds & edds...I mean, that's what it is, but I think of it more like a chance to hear/purchase the Germans' 2003 demo with a bunch of other random junk tacked on that likely no one cares about. A reasonable fan package for the few that want to experience their new favorite band in completion, but not exactly worth the money you might pay for it. However, it does offer a little insight into the band's origins and how they developed into one of Europe's premiere progressive death metal bands due to the excellence of their sophomore album Cosmogenesis in 2009.

Curiously enough, the titular 2003 demo itself seems aimed partially in a melodic black metal direction, or at least that's how some of the more majestic tremolo picked passages come across atmospherically. There are plenty of obvious death metal overtures, and the vocals and breakdowns place it firmly in that camp, but the chord choices that were later more heavily informed by bands like Death and Atheist seemed more vividly European in execution, almost like older Moonspell or Dissection had they gone death metal. Beyond that, the songs feel slightly misshapen, awkward and uninteresting. The 3-minute instrumental intro track wasn't the best choice, and would have greatly benefited from lyrics, while a lot of the shifts between thrashier, simple mid-paced rhythms and floods of blasts with melodic, texture chords seem to struggle with writing anything I'd consider memorable. You can definitely hear the raw space-matter condensing into what they would later evolve into with Retribution and Cosmogenesis, but it might also have gone elsewhere. The guitars are mixed alright, bright enough to make out what they're playing, and the drums are actually more charismatic than on the debut album...but the growls are mundane, and the songs just pass through the ears and mind like so many other melodic black/death demos that fell under the radar in the 90s and 'oughts.

The next three cuts represent a pre-production demo for Cosmogenesis, and you'll immediately recognize "Incarnate" as the best thing on this collection and possibly their career, a spurious and uplifting journey through the cosmos riding on wings supplied by Floridian progressive death metal. "Open the Gates" and the intro riff for "Headworm" are also decent, more brutally inclined stuff with spikes of that aforementioned progression and melody. But really, I'd rather just listen to the sophomore record which is more consistent and fulfilling...I'm not sure how much of the other two tunes were redistributed into later material, if not then perhaps these were good enough that the band could re-record them. Lastly, we get three more cover tunes, which are really obvious like those on the Retribution reissue. A Cynic tune ("How Could I"), an Atheist tune ("Piece of Time"), and another Death track, the unfortunate "Flesh and the Power It Holds". Okay, we get it, fellas, you LOVE Florida so much that I'm surprised there aren't any photos of you wearing Mickey Mouse ears...also that there wasn't also a Nocturnus or Hellwitch song represented. Anyway, these all sound decent, but not removed enough from the originals to be memorable depictions.

Ultimately, Illegitimation does not legitimize itself unless you just love Obscura and want to throw money in their direction. The Germans' roots are very clearly humble, the added content average, and in all honesty they just have one impressive album to their name: Cosmogenesis itself. Even its own successor doesn't necessarily live up to it, so frankly it's hard for me to define this band as anything anyone should really be compelled by beyond just that one disc. Hopefully they'll make me eat that statement in the future, but for now, this isn't worth the trouble.