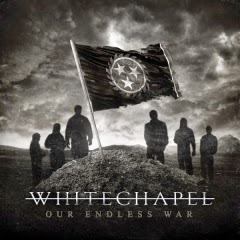 Try as they might to cultivate a distinct personality with their 5th album Our Endless War, Knoxville deathcore champions Whitechapel seem to repeatedly slug themselves into unconsciousness with a stock set of hybrid deathcore/djent grooves that immediately shit all over the fact that this is otherwise a fairly rounded, patient set of tunes with some genuine notion of songwriting and atmosphere. In fact, this might just be one of the most 'accessible' of deathcore's major league outings to date, with the caveat that they largely avoid the shitty emo pop chorus parts that have crept their way into the niche via its metalcore foster home. I can say that I feel like Whitechapel actually sat back after their last album, their most technical and progressive to its day (and coincidentally the first I liked...if barely) and then came up with the idea to redefine/simplify themselves akin to what Mastodon did with The Hunter, or Metallic did with The Black Album. What I can't say is that I enjoy it, because I do not.

The bedrock beneath this record is the djent-ish methodology of the guitar tuning and performance, which cycles through a number of tough guy grooves that wouldn't have been out of place on an Emmure record, but that occasionally strike out into a more purely deathcore variety of slamming, or even a spin on some of the neo-thrash we were starting to hear in the later 90s, which took its influence fully from Slayer's garbage phase or Pantera rather than the more inspirational material of the 80s. There are plenty of blast beats and uptempo passages, but these are often affixed with some of the most banal palm mute chugging of their career. The atmospheric melodies, cleaner guitars (as in the intro "Rise") or other techniques they mix into the formula might seem a tasty distraction for a few seconds, but inevitably they are drawn through gravity back to the most boring and contrived of riffing sequences possible, almost all of which are irritably familiar and lifted to some slight modification from various hardcore, metalcore and groove metal sources. There are still a few proggy inclinations to how some of the drums pan out (the best part of the album, in my opinion), like how they'll splash some bluesier harmonies over those Meshuggah/Special Defects jazz melodies of yesteryear to create some depth, but this is unfortunately not so compelling as it might have been.

The guitars have a reliable, stomach punching tone to them which is anchored by the fat but often difficult to notice bass guitar; however, this drummer goes so unerringly ballistic through so much of the 40 minutes here that he seems to leave the remainder of the players in his wakes. Fills flying everywhere, a good rich mix to the toms and kicks, Ben Harclerode is so consummately talented and professional that at the very least, this record could serve as his try-out reel for a far more important band one day. Not that the other players here lag so far behind that they don't deserve some notice, but the creativity of the chugging is unanimously vacant, and Phil Bozeman's vocals are just so vapidly Anselmo-Jasta-HWAAAAHHH that I barely felt the sustained growls trailing off them. Way too 'tough guy', only like so many of these expendable metalcore/deathcore front men, there is no charisma. I'm sure the guy has his demons, they/we all do, but I couldn't pick them out of a lineup of post-Earth Crisis mosh pilots over the course of the last 20 years, and of course I was just so bored by the music that Diamanda Galas singing over it couldn't have made a difference.

But by far the WORST part of this album would be the lyrics, which are more or less an endless fucking tirade of tired cliches that most angst-ridden tweens pen for their garage bands. 'Just let it go...', 'Fall to your knees', 'Our bodies full of scars', 'This is our way of life'...it's like the songs are all meant to be a part of this Hardcore Self-Affirmation 101 Playbook that aims to justify the band's existence, like it's really them against the world or something, kicking ass on tour and bein' rock stars! No guys, you're not rebels, you play trendy heavy -core music with nary a shred of individuality. Low-hanging fruits plucked from the altar of mediocrity. I'm sure it's all really heart felt (like angina), but what could be more lazy and boring? This album felt so earnestly and desperately bland to me that I almost wonder what I heard in its predecessor, which must have just been a fluke. Our Endless War even looks the part of forgettable, and I think ultimately I liked this one even less than the new Carnifex, which was another step backwards for a potentially promising band. There are exponentially worse albums in this style/these styles, but I sure feel no compulsion to visit this one further.