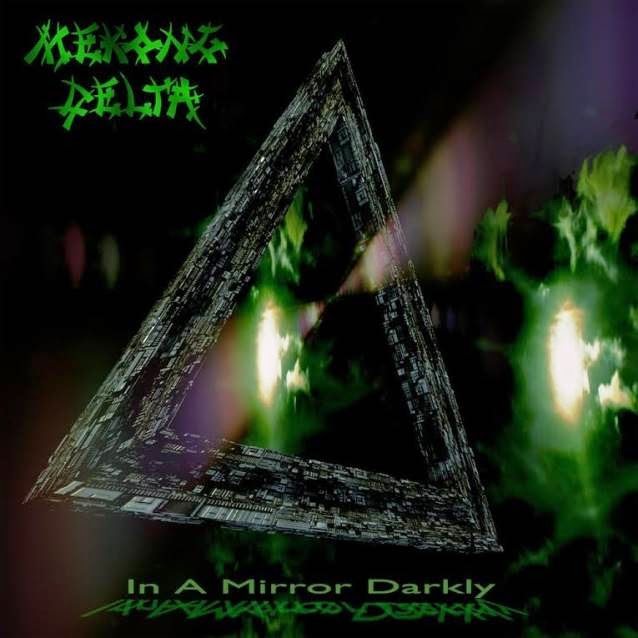 In a Mirror Darkly is a nerdy progressive metal album with some inexcusably shitty cover artwork. It's also a lot less frenetic and psychotic than Mekong Delta's seminal records like The Music of Erich Zahn or The Principle of Doubt, nor is it as forceful and exhilarating as the Germans' 2007 comeback album Lurking Fear. If one or more of those things have turned you off, then I highly advise you skip along and pay this no mind. Otherwise: There. I covered all the flaws, but what I didn't tell you is that In a Mirror Darkly is a thrifty, intricate, intelligent example of progressive demi thrash with absolutely no hesitation to sound as varied and polished as possible. It's Dream Theater with a darker past, Ark without the distractingly Christian undertones, Symphony X without the flourish. Nah, it's Mekong Delta, and sorry to the above, but they were pretty much first...

I am not now and never have been an advocate for Ralf Hubert's decision to clean up the act a little, but this is the second time I've been surprised by that very result. The first was the 2010 classical opus Wanderer on the Edge of Time, which eschewed some of its predecessor's clinical badassery to refine and redefined the band's lifelong love of symphonic music. Now we've got a record which takes on a darker, Lovecraftian exhibition of otherworldly madness in about the cleanest means possible. Nothing new, since they've always had a fascination for this darker lyrical material since at least the second full-length (if not earlier), but this time out you've got a major contrast due to the extremely rich, tidy production values that you'd expect out of far bigger prog metal bands. When it comes down to the riffing, this is more or less a direct channel back to the band's earlier years, with cyclic, psychotic passages of melodic guitars and harmonies which transform Rush-like signatures into something which screams at you from the shadows, or from a surgical slab. Remarkably, the wild cadences and ebbing dementia always present in their earlier records is maintained here, despite the fact that the mix levels lend In a Mirror Darkly a lot more accessibility...

What I mean by that is, proggy mother fuckers who worship the output of labels like Sensory or Inside Out will revel in this album even if they've no interest in its brasher, intense forebears. You've got typical Mekong Delta thrashers like "Mutant Messiah" and "The Armageddon Machine" run up more theatrical, dramatic contrasts like "The Sliver in God's Eye" in which Martin leMar gets to flaunt the emotional range of his vocals, that have more impressive depths than the shriekers of Mekong's past lineups (not to mention a little Tate, Alder or Rivera). Granted, such a piece might be construed as pompous or excessively dweeby by those with a hate on for prog. metal in general, but at the same time there is a whole world of potential fans out there to whom a track like this opens a visible doorway. Personally, I side with the 3-4 heavier tracks on this disc, which are transparently cast as paeans to the band's earlier material, but I cannot complain that the less metallic components are not eloquent, professional, flavorful and help to round out the disc from becoming too manic or aimless, accusations I've seen leveled at the Germans through their past.

I don't know that this has the same level of 'personality' that you'd find on the older works, and  LeMar still seems to me one of their least exciting singers, despite the more mature he takes to the material, but it's really damn solid, and Mekong Delta if nothing else prove that they still belong to that explosive second tier of Teutonic thrash, if they only marginally fit that description part of the time. We've little to no hope that Deathrow or Living Death are reforming to produce visionary works of art, but Hubert's group and Holy Moses are at least holding down the fort. In the Mirror Darkly has a narrative quality to it, a completeness which manages to compensate for the initial instrumental cuts, not exactly the murkiest stuff of squamous horror you'd expect considering some of the lyrical matter, but I'm actually grateful to hear the themes taken in a different direction once in a while, rather than monopolized by cavern-core death metal bands.

The cover image, which translates the band's triangular motif into some cloudy, indiscernible green mess, is astoundingly awful. There is absolutely no reason for a band with 30 years under its belt to produce such amateur pap when they might avail themselves of even the crudest technological advancements...just a clear, digital HD picture of something interesting would have been fine. Not that the last (new material) full-length was an eye-catcher, but this sort of thing rubs me the wrong way, nearly as lamentable as Jag Panzer's Dissident Alliance, which at least had the excuse of being releases a very long time ago. No, In a Mirror Darkly is on a "Hey guys, I spent 5 minutes with a computer graphics program in 1993" level of suck. It's not even bad in a fun way. The icon looks bad, the green logo worse, and the album title? Wow. One wonders if they ran out of funds, out of time, out of ideas, or they threw this together in the last 30 seconds before sending off their master? This is far from Mekong Delta's best album musically, I wouldn't even place it in my personal 'top 5', but surely it deserved a little more luster so that when passersby see it they might have some reason to stop and listen...are we still doing that, people? Wanna guess why more people don't know about this band? It's not just because they're plebeians (well, that too).