Realmbuilder - Fortifications of the Pale Architect (2011) 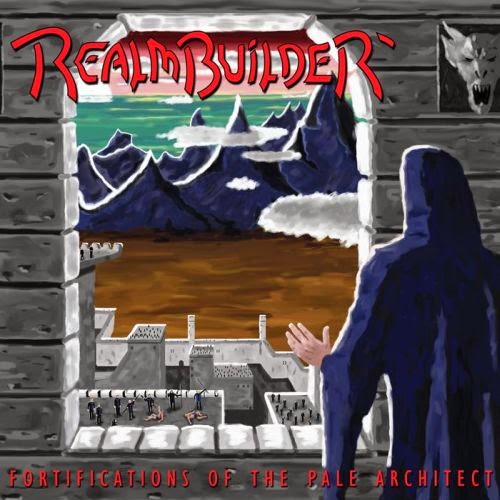 One of the most interesting aspects of New York's Realmbuilder is how, in the construction of their fantastical mythos, they often approach the world-building from a 'ground level' perspective. That is, they tell the tails of the highwayman, the builder, the miner, the peasant, the beholden of the heroic setting, rather than taking the easy way out and scrawling out some woefully generic fantasy tripe involving a cut & paste warrior and his cakewalk over evil wizards and/or dragonkind. Basically, they're the anti-Rhapsody. It's all in their chosen moniker, and the duo's proves all too loyal towards the themes of their sophomore Fortifications of the Pale Architect, a consistent and well written bridge between the first and third records, both stylistically and qualitatively.

Yes, Realmbuilder is the polar opposite of all the frivolous, ribbon-wearing flower metal which thrives upon speed, sugary melodies and fits of classical orchestration to make its point. This is the metal of masons, of craftsmen, laborers who serve beneath their masters, trying to eke out a stable living in an age of sorcerous and barbaric oppression. As 'worker placement' games like Agricola or Pillars of the Earth are to the board game genre, so Fortifications is to the world of heavy/doom metal, and it's a major draw for me. I feel that the instinctual comparisons to Manilla Road or Manowar remain intact: there are obvious Sabbath-borne riffing progressions, and some melodic glazing redolent of Omen, but the honest timbre of Czar's voice reflects that Man-ly sensibility, a guy working with what he's got and not what the genre stereotypes tell us we need. So no screaming, or excess musicality or ability to his music, just pure working class sincerity, with which he manages to work wonders. I mentioned in my review of the third album that it took some getting accustomed to, but going back in time, I wonder why I ever might have hesitated...he's distinct, and plugged into the harmonic vocal arrangements that often spring up in these songs, quite a flawless fit.

Architecturally, the riffs are still extremely simple, as are the drums, with the bass taking a mere support role (not a forte on this disc). But here's the catch: they're relatively memorable, and for all the head scratching about where I've heard them individually in the past, which often soils my experience with a record, I feel like they actually have a unique quality, making chord choices that I really would only expect from this band. As usual, the material is slower in nature, steady and very stripped down...no complexities to distract from the duo's strict adherence to theme. You will feel, in every single track on this sophomore, exactly as if you'd been thrust into the world they've created, which seems like a pastiche of pulp 60s-70s fantasy influences ala Howard, Moorcock, Lewis, Wolfe, Lieber and Saberhagen. Blue collar melodies are about the only uptempo component which breaks from this mold, but when we're in the mood for tales of empires being carved from wood and stone, the pacing here really is effective in relaying the appropriate atmosphere, without ever reducing itself to a glacial procession as you'll find in much monotonous doom.

Seven tracks, nothing wasted, nothing exceedingly repetitious or welcome-wearing, even though the lyrical themes might even arguably lend themselves to such. The rhythm guitar tone is a bit dirtier than on the debut, but we're talking only the most miniscule difference. Aesthetically this throws no curve balls from Summoning the Stone Throwers, but the songs generally rule, in particular "Iron Wheels of the Siege Machines", "Highwayman" and the ridiculously-Bal-Sagoth-titled "The Stars Disappeared from the Sky When We Uncovered the Bones of the First Gods". But really, there is not one I would replace, because this band casts such a unique shadow of escapism that expands the history of their imaginative worlds...but unlike so many fantasy-based power and heavy metal bands, they show a willingness to first place the cornerstones, to harvest the soils, to hunt the beasts, and give us a rare glimpse of a humbler perspective, without betraying the grand concepts we hold so dear in that literary genre. Realmbuilder is a GREAT band, though the polished minimalism of their compositional aspirations might turn away those who seek something more solemn and crushing.