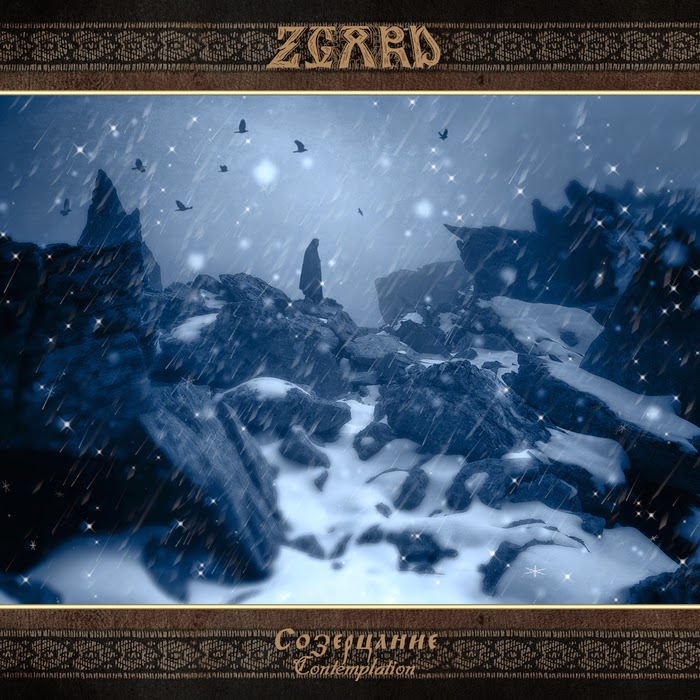 I've always got this soft spot for grandiose, atmospheric pagan black metal. Even when it's a bit shy on the memorable riffing, just that over the top use of keys, vocals in tongues foreign to me, all of it serves as some quasi-cultural escapism that compensates for the 'cheese' and bombast arguably inherent to the entire medium. I bring this up because Zgard, a one-man Ukrainian project, seems to encompass and embrace most of these traits without apology, and on his fourth full-length album seems to collide the aesthetics of bands like Summoning, Burzum, Graveland, Hellveto and Gontyna Kry into an emotionally powerful, if not entirely memorable experience. It took me to a place. Held me there. Not much more can I ask of it...

Laborious, workmanlike riffing which ranges from spacious and dissonance chords to lightly thrashing palm mutes, drenched in simple synthesizer patterns that resemble a steady and slow  Carpathian accumulation of snow, or a raven in flight at half speed. I don't really get tired of the sort of rasp Yaromisl metes out, tortured like a hybrid of Vikernes and Darken, always convincing even if the syllabic lines he intones are quite simplistic. But really, for as packed a record this is in overall atmosphere, it's all quite minimal and predictable. The guitars and synthesizers rarely surprise, and the flute playing is only added for emphasis, it rarely evades the basic chord progressions behind the tunes. Drums are programmed it seems, but so suppressed in the structural composition of these tracks that you won't really notice or mind, since they just don't play a major role when run against the keys, vocals and guitars.

There's one scintillating ambient piece here ("Silence") which I absolutely adored, if for no other reason than it cultivated nostalgia for old fantasy films of the 80s, or rather what I'd perceive might appear in such a cinematic sojourn. But Yaromisl also paces the album really well, with a lot of variation. The more soothing pieces are contrasted with the more uptempo, mug-swilling surge in "Incarnation Memory" which is marginally reminiscent of Bathory's viking metal if you threw on a mouth-harp and some haunted, wavering folk vocals. In the end, though, this is unlikely to appeal to a listener who has a vested disregard for synth-heavy pagan metal, and we're talking a more saturated sound than, say, Kroda. Personally, I didn't find it amazing, but immersive and at times enjoyable, enough that I plan to get around to the earlier material from 2012-2013 which I missed out on. An album for wintry dreamers into Caladan Brood, Summoning, Rivendell, and their ilk.