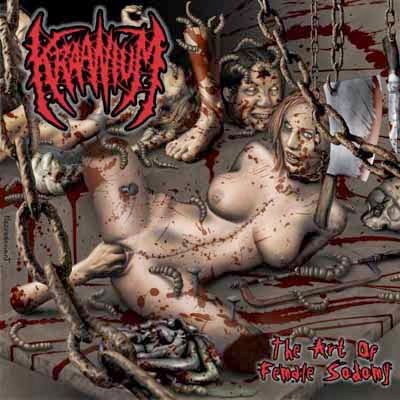 Note: this is a review for the original 2009 version, I am aware there is a 2013 remaster of the album to which several of the complaints might not apply.

The cover art for The Art of Female Sodomy is quite a bit more fucked up than the Kraanium debut; specifically the sort of nasty satisfaction on the faces of the male and female victims. However, of the Norwegians' three full-length records to date, I find this sophomore the most lacking. It's like a denser, more savage spin on the formula of the first one, but for some reason I came away feeling a little less impressed with the dynamic range of the instruments, which feel phoned in...not from one home to the next via telecommunications, but literally someone picked up the handset and smashed it repeatedly into your face. I don't think it honestly matters much, because the devoted brutal death metal fan is going to pursue it anyway since it's 'so fucked up', it's on a label with a decent reputation for the shit, and has song titles like "Masturbation with Fermented Entrails", "Severed Stump Fistfuck" and "Reverse Abortion", but truth be told I just won't ever reach for this over its siblings on those rare occasions when I feel the mood for some unforgiving, conscienceless, mid-level death metal.

Perhaps the first had desensitized me to their sound a little, but then I also enjoyed Post Mortal Coital Fixation from 2012. Perhaps it's that there are a couple rehashed tunes from the debut, and a fucking Waking the Cadaver cover (who cares?!?)...and that with those and the pair of 'bonus tracks' removed this would be little more than a scant, average EP. Nonetheless, the formula is much the same here: atmospheric samples (some might be original, I didn't track all these down to their sources) used to indoctrinate the listener into a barrage of bulldozer blast and slam death metal which is 100% consistently concrete and straightforward in nature. Just a regular day at the butcher shop, with no passion put into the individual cuts, and no seasoning when the meat goes out to the display. All that could amount to a tangible atmosphere here is provided through those aforementioned samples, the guitars are monstrously mundane, especially the palm mute breakdowns which seem a little more prevalent and stripped down than on the debut. Drums feel more lethargic and non-invested, the bass tone here is really boring and subjugated by the rhythm guitar, and the vocals likewise seem to have less character, not that they were particularly distinct or original in the first place, but here they just bludgeon along without much believability to their psychotic message.

That lascivious glee in the eyes of the victims is nowhere to be found in the music. No visceral satisfaction, just a meat truck making a drop-off, and then the chops lumbering around at a zombified pace which seems disturbingly similar to the mosh tactics employed by really fat guys who just plow over girls and kids at a gig, throwing their weight around with little finesse. I don't expect Kraanium to bust out some fly leads or a ballad or anything, but The Art of Female Sodomy sounds hastily or lazily constructed to my ears, and the production doesn't do it much of a service; instruments felt too even to my ears and there's virtually no range or variation in either the sound or the songwriting. A total sausage fest, Scandinavian bro-down which lacks even the depth or character of American bands like Devourment who put a lot more oomph into their mother fucking slam while thinking impure thoughts about yours and everyone else's mother. Skip this if you're new to the band, and check out either of the record's that sandwich it...Ten Sickening Acts is just more fresh and 'innocent', while Post Mortal Coital has a nice rich tone to it and a lot of fun slams. Just wait out the blubbery moshing behemoth at the bar, he'll run out of energy before this 29 minute effort runs out of content.