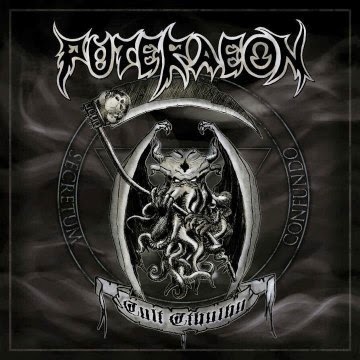 Puteraeon may not have stood so tall above their Swedish death metal throwback peers that their debut The Esoteric Order could be mistaken for something 'unforgettable', but it was unquestionably a well done example of how bands like Carnage and Dismember had a magic immemorial about them which is still possible to recapture when you're not spending half your record fucking around with some of the laziest riffs possible. I'm a little late in covering its followup, Cult Cthulhu, but as the Swedes are on the verge of releasing their third full-length I thought I'd check it out, and would you fucking know it, I don't regret making that choice, even if they still leave something to be desired...

I feel like somewhat of a flip-flopper, because this is presented in a pretty common style which I will either love or condemn to the pit of mediocrity depending on nitpicking of individual riffs, and apart from the ravenous, brutal growl of the frontman, it's pretty much lock, stock and barrel worship of Left Hand Path, Life is an Everflowing Stream and Dark Recollections, with the added benefit of being recorded in the 21st century. So those Sunlight studio rhythm guitar tones sound as plump as over gorged zombies, the harmonies sad and sepulchral, the drums fresh and hellish with kicks that sound like they're stomping straight up your spine. But somehow, the chord patterns and abysmal atmosphere created by the churning of the guitars against the drums stir in me the very dark mood I so loved about its overt influences. It's swampy, oblique, and maybe even evocative of the titular Mythos divinity, no matter how corny the title itself seems.

How about just Club Cthulhu? Bathe in a spa of squamous tentacles, stinking maws and other things that spell your end. Anyway, the Elder ones are nothing to make light of, and I doubt that was the intention of Puteraeon, just to write a savage record in the mold of their heroes. And this is no more or less that very thing. Inspired, not inspiring, chock full of guts but very little resonant evil beyond its visceral finish. If you're sick to death of this sort of cutting and pasting of a style (and I usually am), without adding much new to it (Revel in Flesh, Gluttony and a million others), then this isn't apt to change your mind, but I felt like the sophomore was at least well done. Examples of better efforts in this style include the first few Demonical outings, Entrails, the Miasmal and Tormented debuts, but I managed to make it through this brain-sucking 45 minutes with what shreds of my sanity remained failing to find offense in the style. I hope with the new album they'll try a little harder to differentiate themselves, or build upon the past rather than clone it, but this is just passable.