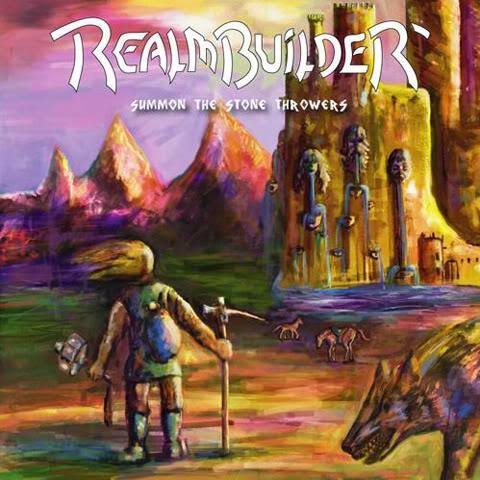 I ask you, fair readers, to take a hiatus from your metrosexual and technologically-advantaged lifestyles for just a brief spell. Step outside and til your fingers through the soil, or your toes through a stream. Build a small cairn of rocks, whether as a marker, a tribute or a tomb. Take a handful of sticks and assemble a simple lean-to, and then cover it in a mesh of leaves. Sharpen a stone or branch as a tool, or a spear, and forage the environment for berries, for fresh water, for anything that will give you that modest edge of survival. New York heavy/doom duo Realmbuilder perform all of these functions, only in the context of heavy rock music which reaches to the roots of its medium, jerks them forth from the dirt, and then cooks them into a refreshingly tasty stew, enough to feed a family of forever.

Timeless, interesting hooks define this debut, a few overt nods to Black Sabbath being the only true comparison I can make without feeling unfair to the band. Imagine if bands like Manilla Road or DoomSword started releasing records in the 70s, after checking out a pile of damaged mass market paperback fantasy novels from the local library. Tolkien, Lloyd Alexander, Earthsea, Chronicles of Narnia, Conan tales. Now imagine they also strived for the clean production values so many pop and rock bands achieved during that age, and were fronted by a workmanlike, charismatic individual who is fully cognizant of his own limitations and so supplants any illusion of 'range' and 'screaming' with a stolid, earthen sense of authenticity. Glaze this over with somber, harmonic choirs, a constant sense of steady momentum, and a genuine sense of inspiration you certainly don't hear in a lot of copycat doom metal acts, or 80s cheese metal throwbacks. Summon the Stone Throwers is hardly flawless, and in fact I find it the weakest of their three full-lengths, but already they had sown the seeds of style AND substance here, which were very near flowered.

If you can guess already, I want this to be one of the biggest bands in the world. Most likely they'll remain deep in the underground, appealing to a few hundred souls, which is acceptable, but they are a paragon exemplar of how you can reduce a musical genre to its seminal components and then rewire those into a damn fine frame of heavy metal, where anything is possible. Horns, melodies, bitter but brew-sated vocals, this band will cautiously test the waters of a number of possibilities over their career, and Summon the Stone Throwers is an adequate indoctrination to a future that is so heavily strung up by the past. The riffs are quite simple, sluggish if not entirely static chord progressions that are laced with quaint and catchy melodies. I believe the sheer cleanliness of the guitar tone might prove a little too polished for some listeners, who want their doom pregnant with saturation and disgust, but I think this choice works staggeringly well in the context of how they deliver the vocals, absurdly vacant bass-lines and minimalistic drum beats.

Lyrically, Stone Throwers is mildly more epic and warlike than its successor, but you still get the perspective of a looker-on rather than the predictable, heroic visions of fantasy spewed forth from the pens and minds of most heavy and power metal musicians. This is riddled with themes of power or class struggles, siege warfare, reading like second hand accounts of historical events in a low fantasy setting which isn't plagued with multi-hued rainbows or excess magical weavings. As such, it's a little beyond the barbaric perspective of Howard's Cimmerian hero, more of a cultured milieu, points of light and civilization being snuffed out by greedy brigands or other challenges of a medieval or Dark Age setting. It's a fine soundtrack for either a rustic afternoon, a drive to the Renaissance Faire, a board game with cool friends (Shadows Over Camelot, Citadels, Kingsburg, etc), or just reading ancient architectural texts by candlelight. Among the better songs are "Ninety-Nine Raids" and "Forgotten Minion", but it's all pretty consistent in value. Hell, could there be a better catapult song than the title track, or did I interpret that wrong?