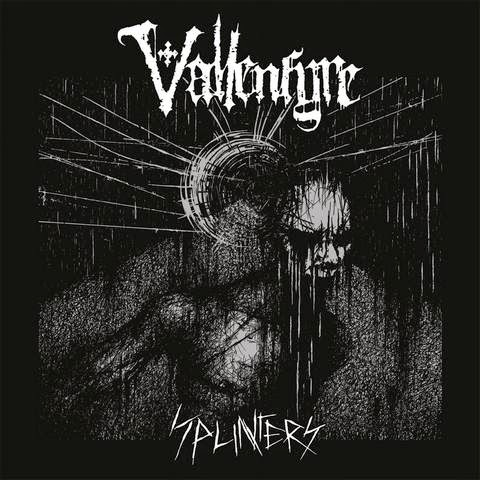 Splinters is another of those retro death metal records of which the production values alone will no doubt spin a lot of heads. I only wish mine was among them, because when I break this down to a musical level alone, there's just not much interesting happening and I feel like this entire wave of throwback extremity is surely and steadily starting to jump a shark. That's not to mock the efforts of Gregor Mackintosh and company, since they at least generate a solid effort at contrasting moderate-speed Swedish death metal with the harrowing death/doom of Gregor's mainstay. But when the considerable smoke clears from this sophomore experience, I don't think there's a single riff I feel like revisiting, and that doesn't speak of its chances when there are a few hundred other comparable records vying for the same attention spans.

Splinters is not a far cry from the Vallenfyre debut, only it seems a bit more raw and attitude driven, like a hybrid of modern Asphyx/Hail of Bullets with late 80s Paradise Lost, ancient Celtic Frost/ Hellhammer grooves ("Odious Bliss") and then some creatively bankrupt d-beat riffing passages which remind me quite a lot of tunes by the latest in the Entombed-core craze. You've got sad little melodies woven through the meatier, flesh-torn distorted rhythm guitars, but unfortunately they all feel really plain and simplified to the point that they can't even touch the genuine melancholy and gloom cast by Gregor's earlier material with Paradise Lost (Gothic, Icon, etc). The drumming is quite fantastic, in fact I love how the album opened with just the simple string of crushing chords and then a mighty fill which put me instantly in the mood to enjoy this...only it turns out that much of the material really lacks that sense of explosive excitement and so many of the riffing patterns are derivative to the point that I wanted to skip over them and hope for some light in the mist. At best they erupt into some semblance of almost-memorable punishment ("Savages Arise"), but the notes just never fall into place for me to fully invest myself into these songs.

On the plus side, for a lot of younger fans, or people who just want the enormous guitar tone you'll find amongst those bands attempting to out-Swede Sweden, the sound on this album alone is likely to make it one of your weekly favorites. Combined with Gregor's enormous, brick-faced growls, it does pack a loud punch somewhere in between Nails and Hail of Bullets. Now if only the chords chosen were thoughtful, interesting or at least bluntly evil in effect, there would be something more than a mere visceral thrill in listening through this. The slower, doom parts never make me feel doomed, just sort of run of the mill seeing that they come from a guy who has been part of some of the best tunes the field has ever offer. The speedier bits are just analogs for a thousand other bands, showing some life in the old limbs of the performers but never once presenting something that sticks. I'm usually a guitar guy, so if I'm paying more attention to Adrian Erlandsson then Gregor and Hamish, that tells me something. On the whole though, if you want Grave, Dismember, Entombed and Unleashed updated yet again with the crush dialed up, this is likely to sate that craving...I just think there are so many other bands doing it better, and a severe lack of nuance and atmosphere (beyond the guitar tone, I mean) send this one pitching into an opaque void, while A Fragile King managed to hover for awhile longer over that same precipice.