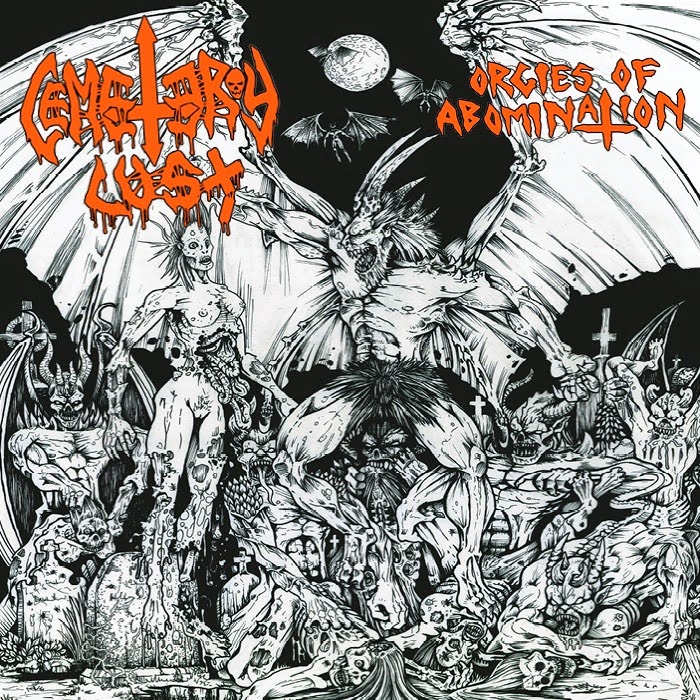 Your band is dubbed Cemetery Lust. Your second album, Orgies of Abomination. You have a bassist who goes by the handle of 'Raypist', and several members nicknamed 'Nasty'. You are out to troll the universe at the expense of the politically correct, the weak of heart and stomach. To do this, you'll mete out some of the most intentionally crude and brash death/thrash metal possible, with what must be among the most puerile of riffing progressions available, often involving just a small handful of chords, wailing leads and a vocalist with a gruff, barking profile heavily redolent of tough sounding 80s mid-listers in both the crossover and pure thrash mediums. You have cast any and all illusions of nuance, musical ability and (possibly) good taste to the stinking winds, the only pretentiousness that which is well within spitting distance...

Shifting perspectives: my first thought was that I was either going to love or hate this record, but like so many of the death/thrash or black/thrash hybrids promoting the baser instincts of their influences, I found myself stuck somewhere in the middle of those two reactions. Orgies of Abomination is as plain as day, derivative old school dirty thrash metal with a slight impetus for tremolo picked death metal passages and perhaps a little bit of smut-black cultivated through the lyrical themes and visual aesthetics. A little Slayer, a little Speak English or Die, a healthy heaping of Fistful of Metal all sauteed with a modicum of German influence via Kreator or Sodom, only lacking in the mighty riff construction capabilities that vaulted such names into legend. You've got some angrier gladiatorial charge parts, mid-paced neck-jerking thrash mutes, and most of what you'd find in between those poles. Bass is murky but audible, but even if it were at a louder volume I don't think the lines would really stand apart from the rhythm tracks. Drums are lewd and rude, clangy, rehearsal raw but tight enough that they eschew any sloppiness in that area.

As a thrasher of about 30 years, if we count Show No Mercy and Kill 'Em All, I naturally have some high standards for the style, and those are very far from being met here. Cemetery Lust doesn't sound particularly pissed off, wicked, evil or even that invested in what they're creating here...just a bunch of guys out to have some fun and play the music which obviously inspires them to this day. A number of similar acts have also come from the Hell's Headbangers, and you can really tell the allure: there is something primal and authentic about the leather, chains, denim and attitude that radiates from a recording like this. Unfortunately, that authenticity can trace itself back to a pretty average garage thrash band in the 80s, or a dime a dozen death metal demo from the dawn of the genre, emulating its heroes without adding anything of note. You might not hear a lot of vocals like this in the current time, since more go for the black rasp or death growl, but it was never the most interesting style despite its everyman sense of brute honesty. I really felt like the band showed the potential to punish us with better and more aggressive riffs, but seemed to hold back since seriously kicking our asses might not have been the modus operandi...

I did appreciate that loud, sincere and lo-fi production, as Orgies holds up to rather high volumes and reminds me of a lot of jam sessions I participated in as a teen when we'd just let a tape recorder role and fuck around with choppy blast beats, proto-death and derivative thrash passages while coughing randomly into microphones. There's a place for the style, and if you've a natural predilection for party trash of a goofy but sinister bent, this album might be worth checking out. Alas, the tunes just eluded me almost seconds after hearing them, on numerous occasions, and I'm just looking for so much more out of this style. For instance, check out Ketzer, or Deathhammer, or Antichrist Sweden, all more or less exemplars of the niche who blaze paths of blood and fire across your skull. I don't fault it for its simplicity, but even in that realm there must be some more vile and memorable set of riffs that can be impaled into the listeners' ears...Cemetery Lust seemed to be all about the 'fun' here but it's just not that funny or ironic or charming beyond the black/white cover art.