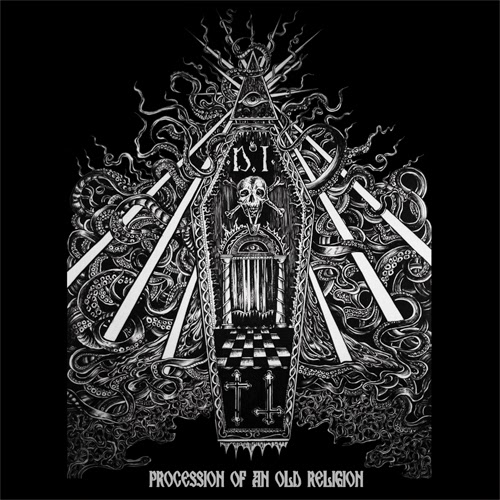 As much as I've tried, there just doesn't seem to be any way I can keep tabs on all the Greek black metal these days. Case in point: this band, Deus Ignotus had a full length a few years back that slipped past me entirely, so the Procession of an Old Religion EP through Forever Plagued records is actually my first exposure to their sound. And a fast, furious sound that is, putting a bit of a death and grind spin on the standard black metal tropes and, thankfully, actually attempting to come up with a few riffs worth a notice, where so many of their peers in recent times seem entirely inept at composing or caring about anything related to a guitar line that hasn't been heard before...

Not that I'm implying this is brilliant, exactly, and it suffers a little bit from blast-itis, but the bass lines have this coy groove to them which seems to swerve and/or hover just beneath the streaming chords and tremolo guitars, and there are at least 4-5 rhythm progressions across the four metal tunes which had me excited to play them back again. Deus Ignotus is certainly a band that wants to let us know they're in a hurry, and the guttural vocal barks serve little purpose other than showcasing a primate bludgeoning contrast to the far busier music. The mix is hellish, loud and overwhelming, the samples and intro organs fitting if not impressive, and there's also nothing decidedly Hellenic about how they sound, fitting more into a broader European context of bands like 1349, Marduk, or the earlier works of their countrymen Naer Mataron. Sure, the vocals aren't exactly typical for the sort of rapid black metal being performed, but over the last decade a lot of bands have turned towards using the growls over the rasps, so it's not uncommon either.

It's never boring, apart from the impenetrable blasting components, which don't possess a lot of variation or nuance, and over in about 16 minutes. Ultimately, I found myself on the fence, since some of the riffs show a lot of potential, but the rest of the work is not very rewarding to those who just aren't in the market for more intense, accelerated black metal.  But if you're out there trying to track down some incendiary material redolent of the Scandinavian forebears, or even the Polish boundary forcers, then Procession of an Old Religion is hardly going to offend you. In fact, it might even impress you. I didn't feel so strongly about this, but at some point I'll have to get back and check their full-length out. I imagine that format would lend itself to some more diversity in songwriting.