Dead Congregation - Promulgation of the Fall (2014) 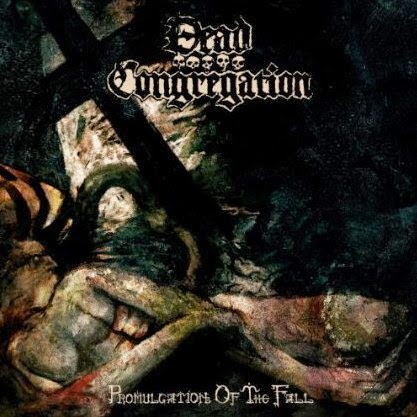 Dead Congregation's 2008 debut Graves of the Archangels was among the more popular of the 90s death metal throwbacks, and I surely know a number of folks on and off-line who continue to sing its praises to this day, though I was not particularly enamored with it to the point that I could share in the cheers. Basically well done Incantation worship tempered with the shifting energies of NY standbys Immolation, the speed and temerity of vintage Morbid Angel (first three albums) and a smattering of other, more obscure acts like Rottrevore, that album was consistent and solid material which only fell short in terms of how the songs resonated with me. As a follower of the genre since its birth, I still have that notion implanted of me that when I want to hear a death metal record, I want great songs, and the Greeks' material sort of all flows together, cohering into an album on which individual tracks don't have a whole lot of distinction from one another. Promulgation of the Fall follows suite, though after a six year hiatus, mother fuckers be so hungry for this sound that they are very likely to devour it. This will be an album of the year upon many a short list come December, but not for this author...

That said, it would be remiss for me to sell short the strengths of this quartet. Promulgation is one damn level playing field, that level being one of the substrata of Inferno. The production on this disc is pretty much perfect...like Incantation's last outing, the dissonance, twisting melodies and force of the rhythm guitar chords work in perfect unison, while the drumming here is of a more innately brutal and technical leaning than what you expect out of many cavern core/occult death metal bands. It's just much cleaner and less crashy than you might expect. The bass isn't the thickest, but it's stuffed with enough bacon to satisfy its own presence, and the Pillard-ian gutturals also have enough depth and resonance to compete with the busier goings-on in the rest of the band. Structurally, the Greeks a good deal more variation than most of their peers, oozing from slower, roiling grooves to storming blast bursts and loads of tremolo picked guitars which summon forth the 90s. There is an impressive sense of balance, a very measured element to the songwriting that makes it seem like an album which took so long to produce...nothing feels cheap or fucked around or boring, and they almost never take the 'easy' way out with riffs that are less than busy, textured or atmosphere in how they fit one another like pieces of a subterranean, cryptic puzzle.

But ultimately, where Dead Congregation excels in a more professional and complete package than so many similar bands of the last 5-10 years, the song quality here still seems to evade me. Most of the tremolo riffs are mere derivatives of a million that predate them, without offering catchier or more unexpected note choices. The best I can say is they rarely wear out their welcome, and the band does perform with a lot cleaner skill than others who go for bulkier saturated distortion or far too reverb laden leads and vocals. How the Greeks paced this out was rather smart, interspersing the more atmospheric tunes like "Promulgation..." itself in with their busier, frenzied counterparts, but even then I just wasn't hearing riffs that stuck with me for very long. The blasted parts are rarely very interesting beyond their tight execution, the floods of melodic chords there just hammer away into a void of disinterest, rather than shimmering up from the depths with a hellish pallor. The lyrics were actually quite well written, often quotable, and a nice match for the aesthetics of the songwriting, but I often felt like the delicate balance of atmosphere and aggression was much stronger than the notes themselves, and wound up having a lukewarm reaction not unlike the one I felt for Disma's debut, which was another heavily hyped release post-Incantation, though slower and more crushing.

There are death metal records from 25 years ago, 20 years ago, 15, 10 or 5 that still manage to stick with me in an ageless fashion, whereas I've struggled to remember Promulgation of the Fall even an hour or so after experiencing it. It just lacks the identity and novelty of so many of its influences, and can really only ever be another 'good' outing rather than a great one. Of course, Dead Congregation should be credited for the proficiency and morbid perspicacity with which they approach the genre. The 'down time' was spent polishing up their skills and sound, and through touring promotions and word of mouth, I find it very likely that they'll prove one of the survivors once this nostalgic wave of 90s death metal moves on and something else takes its place. There is no horsing around here, a seasoned and serious assault on the houses of the holy. It just lacks that infectiousness to it which I so rabidly seek in death metal, and it's not really innovative or unforgettable enough to tear itself from the long shadows cast by its influences.