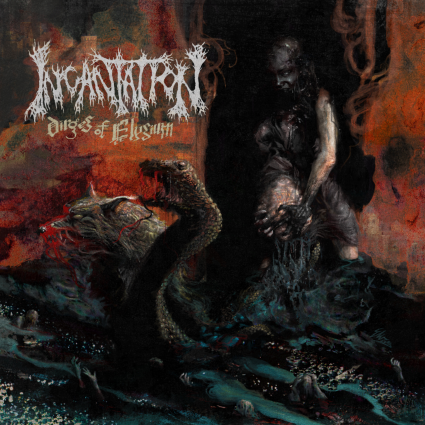 Godless, primal death metal mavens are having a veritable feast of late, with new records from bands like Teitanblood, Autopsy and Dead Congregation; yet I find myself drawn slightly more strongly towards the latest offering from another scene veteran, John McEntee and his fellow lords of gloom, Incantation. Coming off Vanquished in Vengeance in 2012, an incredibly strong re-affirmation record which saw the Pennsylvanians ramp up their production values and songwriting to a marginally more accessible tier, without losing any of what made them so important back in the 90s (even if fans at the time wouldn't know it yet). Enter Dirges of Elysium, a new effort which adheres to the same potent level of sound and variation, only venturing slightly further into the death/doom well which they've always inhabited, and I cannot say I'm disappointed in the least...this is one effective, oppressive, spiritually cumbersome beast which compensates for a lack of innovation with really well-written songs, and largely winning riffs.

That's right, there isn't necessarily a single damned thing on Dirges that you've not encountered before, from either this band, Autopsy or others of their ilk, yet Incantation pull it off remarkably, as if the whole medium were fresh and had just been invented yesterday. Not every individual riffing thread is victorious, perhaps, but the slower tremolo picked sequences feel morbid and cavernous, the downtrodden harmonies enough to churn the clouds and grey the sky, and both the leads and rhythm guitars covering a broader scope of tempos than much of the band's backlog. If this were some brand new head on the chopping block, it might feel entirely too derivative of McEntee's legacy, and yet this is the fucking genuine article, an ablution of sickness, suffering and depravity which takes its sweet time crushing your head. In fact, paired up with its predecessor Vanquished in Vengeance, I'm going to have to say that this has been my favorite epoch of the band since the first two records. They just have that much more of an impact on me as I'm listening...not the most memorable works in their field by a very long shot, but prime examples of seasoned mortuary-craft which possess a metric ton of replay value. Dirges is slower, sure, and that's not always my thing, but I was rarely bored here (perhaps in 1-2 songs top). Incantation continues to spew the gene-seed that still runs in the veins of so many of their followers...

McEntee's vocals remain a selling and life-quelling point, rumbling like boulders being shifted about the Underworld to participate in Sisyphean tortures, fully evocative of the darkness beneath that this band has always called home. Rhythm guitars retain that robust flesh, alternately murky and dextrous despite the largely simplistic chord and note progressions the band champions. Bass lines are fitful, creepy and adventurous. Drums: clear but crash-tested. Nothing technical anywhere, but where Incantation succeed and so many others fail is in how perfectly level they can measure off atmosphere against finesse, opacity against clarity, the static and the kinetic, the dying and the fucking dead. I'm not saying these are the sorts of riffs to die for that we'll be recounting for the next 20 years, like the ones we first dug up 20 years ago through the most seminal of works, but this is just a very dependable, believable form of escapism into the subterranean haze. The intro is good, the faster riffs sound evil, and even the more bloated compositions manage not to induce the 'snooze setting' because they feel epic rather than meandering or directionless.

Oh, the grandeur of the gruesome! Dirges of Elysium beats with the same rotten heart that started pumping a quarter century past, and yet the ichor-choked arteries seem to have undergone some refinement. Friendlier, maybe, but in the way it's more congenial to be eaten alive directly than to be toyed with over a long, bloody hunt.