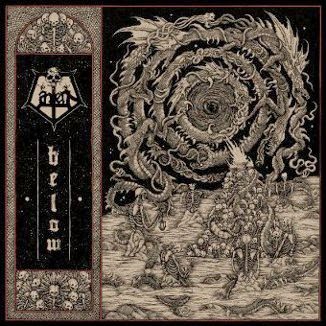 If the Subterranean Effulgence EP (2011) made anything clear to me, it was that someone had finally concocted an effective soundtrack to the 1978 published Advanced Dungeons & Dragons adventure Tomb of Horrors. Okay, so that might not 'technically' be the theme behind these Finns' music, but between the black & white cover art, which looked a lot like the visual aids included in the module, and the oppressive and mysterious subterranean atmosphere which felt more 'dungeon' than 'cavern', and the fact he band is called Lantern, which is as everyone knows the human dungeon crawlers' most important tool (neither a sword or spellbook will be much use in the dark), you can forgive me for drawing that conclusion. That said, I was only borderline impressed with my initial exposure...but their first full-length Below, has capitalized upon my favorable reaction ever since I started listening through it last year, and gone a lot further towards ranking the duo among my favorite of the 21st century death metal claustrophobes.

It doesn't hurt that the band's sense for melodic endowment reminds me of the American one-man act The Wakedead Gathering, who I often rave about, but Lantern definitely has its own thing happening with regards to pacing and rhythm guitar composition. Warmer floods of chords are often incorporated into more dissonant, chaotic and faster paced passages which give off a playful, carnival black metal vibe despite the morbid surface level of the music. Creepy, descending little harmonies, busy songwriting which entirely eschews the basic and oft boring riff tenets that plague a lot of the Incantation/Autopsy derived death metal, and a great level of contrast between the more intense passages and atmospheric calms. The drums have this concise, popping feel to them which I found worked wondrously against the thicker, coiled and springy thickness of the chords, exotic wailing of the lush lead guitars and even the lavish, brief droning guitar segues which provide a multi-faceted soundscape undercurrent when the metal subsides. Another fantastic choice here was the T.G. Warrior-meets-earlier-Johan Edlund bark of the vocalist, dowsed in reverb and echo and constantly reminding us we're in some underground space, unearthing the mysteries of our forebears, or worse...some malevolent, ancient civilization.

The way he and those striking melodies set up "Revenant" should have just about anyone who is not yet fully jaded on this style hooked right through the...gill...no, that doesn't work. Whatever troglodytes have that you could stick a sharp metal object through! Warlike fills, incredibly lyrics, tasteful and nuanced chugging segments, and a juicy bass-line always hovering beneath the rich fermented rhythm guitars. I also enjoyed that for a somewhat concise, 40 minutes and seven tracks, there was such a degree of distinction between individual tunes, in both length, tempo and note choices. This was well planned, well executed, and frankly I'm ashamed of myself for only giving it a cursory 2-3 listens when it first was released last May. It's one of those records which I seem to appreciate more with each listen, even to the point that I like it more this late in the review than when I first started. Impressive material which transcends the monotony and disaffection with which a lot of musicians tend to use as a treatment for their old school death metal fixes. This is voyeurism into the deep dark, your only guide a glass-enshrouded, temporary flame which could blink out at any moment if you've not come prepared with additional flasks of oil. Keep thy weapon in hand, adventurer, for there are deadly magical traps around every corner, and a particular demilich somewhere below, whose dusty bones grow anxious for a victim with each passing decade...awesome record!