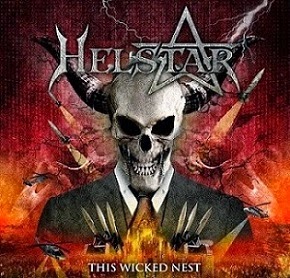 I could really do without the generic politicizing on metal albums! My own politics are barbaric, dubious at best and fall somewhere between the Klingon and Sith Empires, but when I hear some cliched quote like the one you'll find at the beginning of "Fall of Dominion" circa Thomas Jefferson, my eyes start to roll up. Not that these words have somehow lost their relevance or meaning in a world saturated with gamma male government media bullshit (i.e. today), I just think it's a case where artists will pluck a fat, ripe fruit safely from a low hanging branch...like most Hollywood films or television shows, they seem to think we're all stupid lemmings and can't dig a little deeper beyond our History 101 texts. Holy crass over-analysis, I think I'm actually supposed to be writing a music review here...

Fortunately, that is where Helstar excels on This Wicked Nest, their eight full-length effort (I'm not counting the rare one with the re-recordings), which continues the 'THRASHSTAR' legacy they embarked on with Glory of Chaos four years back. Not that they've suddenly transformed into a Houston Slayer, or anything, but they mix up the shred-infused power metal aesthetics with a lot of harder hitting, low-end palm muted phrases and pure propulsion that worked for me last time, and it works again here...hard. Despite me scoffing at the quote in the first tune, the inaugural melodies really do a lot to set up that air of elegance, emotion and sophistication they imbued into their cult classics like A Distant Thunder and/or Nosferatu, and once those Branagan/Trevino riffs start blazing along, I was immediately infected. Furthermore, once James Rivera lets out that first Halford-esque scream, I must have reverse aged about 25 fucking years to better days when the metal was put to the pedal and bands like this very fucking one used to dominate my Walkman as I delivered the dailies to middle class suburbia. Oh what a sight and sound I made.

(Ed: Tried to review the rest of this from a 14-year-old perspective, failed, deleted. So allow me to fail from my normal, frighteningly-close-to-middle age.)

At any rate, if you did not enjoy the harder hitting spin on the classic Helstar formula present on the last album, it's unlikely this will alter that perception, but I for one just enjoy having a USPM band open the silos and just let goddamn loose. Attacker did it last year, and while This Wicked Nest is nowhere near as brilliant, it's chalk full of bustling thrash chops and James' indistinguishable voice which sounds just as powerful, cutting and unique as it ever did 25-30 years ago. I like to think that New Helstar continuously seeks atonement for Multiples of Black with these newer albums, and if they continue to entertainment on this level I may eventually offer my personal forgiveness. The riffs are hardly rocket science, and not as individually memorable as those you'd fine on Nosferatu or any of the albums before that, but there's this great balance of forward-charging patterns and formidable, traditional leads, interspersed with slower, harmonized mute picking patterns reminiscent of their 1988-1989 stuff which just gets me every time I hear it. The bass-lines are thick, the drums are a little too poppy but otherwise inhabit that fulfilling sense of ass-kicking energy the Texans espouse.

This is not exactly the dirtiest or evilest material, but it's that contrast between the pummeling rhythm guitars and Rivera's higher range that gives it a Painkiller-on-steroids feel in tunes like "It Has Risen" and the title cut, which is pretty much perfect for pumping iron and makes me air-kick at the nearest wall like a pussy. The good ole spry triplet gallops return, as do the slicing effects on Rivera where he'll echo off some higher pitched scream at the edge of the pan, giving him the audio countenance of an alien air raid. In truth he doesn't sound a whole lot different than a quarter century ago, with the exception of marginal studio wizardry, and the guy even throws out some nasty black/thrash rasps which don't sound nearly as hokey as they might have. There are points where this transitions directly into what feels like a meatier castoff from A Distant Thunder, or something which might have sufficed on either of the Destiny's End records, and while that's not 'news' it still feels as vividly and appropriately entertaining as anything this band will likely ever write again...

This Wicked Nest suffers slightly from a lack of subtlety, nuance and variation, and I for one would love another concept disc like Nosferatu where those elements are better formed and fulfilled, but in the meantime I am more than happy to hear Helstar clad its nostalgia with the armor of the present. Might lack some of the surprise reaction I had towards Glory of Chaos, but at the very least this was the most 'fun' album I've experienced in several weeks, and so once again I offer my thanks to Rivera, Branagan and company for holding this beast together way beyond its expiration date.