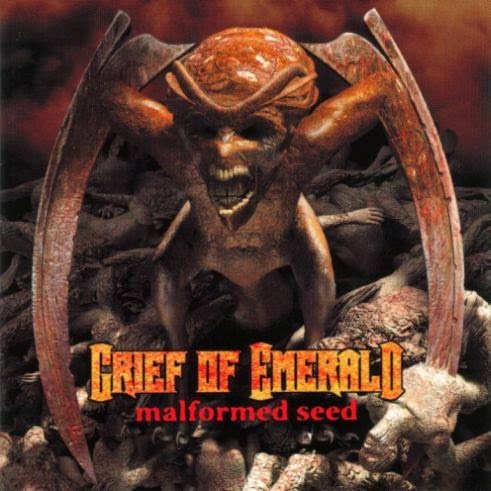 While the second attempt at creating a Grief of Emerald logo using some arbitrary low-level font failed miserably, and the cover artwork to their sophomore is more laughable than demonic as intended, I do think Malformed Seed takes a single stride forward in terms of effectiveness. The Swedes seemed to have better settled into the symphonic black metal histrionics here with a little more compulsion than merely to blast away as derivatively as possible and ride in the wake of far better bands who released prominent recordings 5-6 years earlier. I'm not implying a broad stylistic gulf between this and its predecessor Nightspawn, but a few times on this album I felt like I almost heard a genuinely decent riff churned out amidst so many vapid impostors.

There is a slightly deeper end to this, with perhaps a lot more double-bass groove patterns infested with the incendiary tremolo picked guitars and basic chord configurations that defined the debut. The synths seem to swell with a more voluptuous malevolence, all strings and fell angel choirs splayed out in rather common and predictable patterns that lend a fuller body to the thinner sound of the guitars. There are also a number of more chug-like bottom end riff patterns which fall somewhere between Samael's "Jupiterian Vibe" and any random sequence off Dimmu Borgir's Enthrone Darkness Triumphant or Spiritual Black Dimensions, performed with a warlike, steady bombast that gives the impression of a couple of gargoyle armies launching themselves to war in a massive subterranean cavern, its vaulted walls alight with the radiance of magma. Of course, whichever of these forces the ugly 'cover model' belongs to, I hope would be the loser, so that its ugly countenance can be smashed to pebbles...but I digress. Occasionally these lower, loping grooves take on a more death meta vibe circa Morbid Angel's Blessed Are the Sick or Domination, albeit with less interesting notation.

While atmosphere was not exactly vacant from Nightspawn, Malformed Seed ramps it all up with that stronger contrast of bass-like tones and cavernous faux-organs. The vocals retain a stock rasp which presents them as indistinguishable from a hundred other bands in the medium, never arranged into anything that remotely resembles a fascinating threat, and in fact they often feel quite independent from the music, due most likely to the production. That aforementioned focus on the double-bass beatdowns also leaves me with the mild impression that the Swedes were going for a more mosh-friendly sound here, still accountable to all the Norsecore hordes, but aimed more centrally at an audience that at was the time more concerned with chug-laden melodic death metal and whatever was on Nuclear Blast that week. The result is at best like Samael's Passage without the soul and songwriting, and at worst just another of those countless late second wave duds that populated the later 90s to bursting. 14 years later, this retains a small modicum of cheesy entertainment, but it's absolutely faceless when paired up against any record that meant a damn.