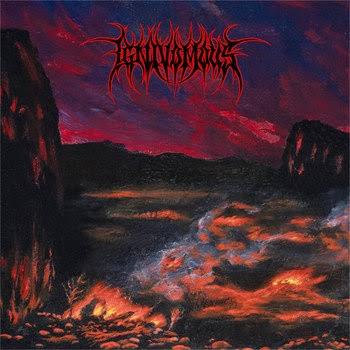 The artwork on my CD booklet for this is incredibly dim, so I was glad to score a brighter digital pic for the review. Really, though, just adjust your eyes, for when the pyroclasmic finale of humanity arrives, it won't be pretty. All roiling lava, sinking structures, smoke-filled sky and lungs slowly breathing their last. Then darkness. Contragenesis, being the counter to creation, is mildly more vivid and exciting in texture than that suffocating imagery might hint, but there is nothing comfortable about this record, just a damned consistent pummeling of the skull packed with tension and dynamics, a Mortal Throne of Nazarene sitting in the second row at a demolition derby and hurling popcorn at the destruction below. And if Death Transmutation hadn't been an ample enough effort to convince you of Ignivomous' magma-spewing audacity, this one surely secures their spot as one of the chief retro-brutal death metal exports of all the Australian continent.

Contragenesis' production is perhaps the best thing about it, with these caustic, crushing flows of riffing fuzz that cascade across a number of low end, tremolo picked harmonies that are so fat sounding I can barely comprehend how they manage to fit them over the dextrous drumming without the amps exploding. Loads of low end grooves round out the pacing, and just about every time they set up some bristling new progression they manage to mold the listener's imagination back to excitement with some sort of endtimes aural dopamine drug that constantly refreshes you, no matter how tired you might be of hearing the subterranean death metal craze of the new 'teens. Vocals capture all that cavernous resonance of a Craig Pillard or Ross Doland, and while that's probably not the sickest or most distinctive of styles so many years after the originals were first spawned forth, they do such a good job mixing these to the guitars and drums that it they sound fucking monolithic. The bass does tend to blend too much into the rhythm tracks, and the frilly little leads peppered sporadically among the compositions could be a little louder and in the face, but otherwise Contragenesis is one of the best sounding throwback death metal gems in my entire collection...

Now, this is not a 'riff' band. They have a hundred of the things, but they're not individually impressive or varied enough to really make it an album where you'd pick out particular songs to throw on a mix for your new girlfriend. No, Ignivomous once again demands that you sit there and take each molten spray in the face, endless gushing 'gasms of melted matter; but for what it's worth, there is certainly a level of complexity and nuance with what they do...these are busier patterns than your normal cave evil, and the constant threat of leads or end-phrase embellishments keep it interesting. Contragenesis might have lacked some of the surprise and malevolence of its predecessor, but it very nearly compensates in that it's a tighter effort with a meatier tone that sounds ridiculously morbid and voluptuous bursting out the speakers. I'm not sure how long their style will last without some tweaking and progression between releases (there is a little here from the first), but in the meantime this is just a corpulent libation to both Finnish ghoulishness and the darker, more impenetrable side of 90s NYDM which should not be ignored by anyone who revels in such claustrophobic, evil flatulence from below the Earth's crust.