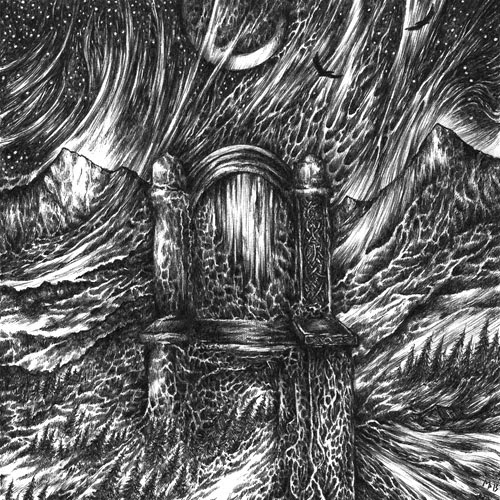 It's very much a shame I missed this one on release last December, it would have made for a pretty perfect kickoff to a steady winter season and almost seems out of place now that Spring is bursting forth in my neck of the woods. That said, if you've run across Aurvandil in the past, you know damn well what's at stake: a desolate, passionate experience which is best listened to in a state of solitude, preferably as far from the rest of your human surroundings as possible. Thrones isn't quite as impenetrably cold as its predecessor Yearning from 2011, but it's another substantial landscape of subtle, glorious details that won't fail to either lift or drown your spirit, dependent wholly on the reaction you typically observe for such a lonely, poignant sojourn.

This was originally a limited cassette, but has recently been released to wider digital distribution through Eisenwald Tonschmiede. Four compositions, each quite a bit longer than those on Yearning, a bit closer in corporeality to the 2010 EP Ferd. Bleak acoustics set the stage for tunes like "For Whom Burnest Thou", "Ingen Lindring" and "Summon the Storms", and though these guitars might not seem the most captivating in terms of their note construction, they flow really well, and give the listener the impression that a storm is about to strike, which of course what happens when the ruddy-cheeked, grainy electric guitars flow forth and initiate a dirty but majestic ascent into the eaves of distant highlands. Bathory and Immortal remain apt references, but how Aurvandil approaches his production sets him apart. It seems simultaneously lower in fidelity but really maintains a slight air of accessibility. Rhythm guitars power forth without searing into seemingly complex patterns, and there's always a patient, uplifting melody. Bass-lines are actually prevalent, though they usually follow the root notes of the higher-pitched guitars. One of the more distinct measures taken here is how his vocals sort of hover painfully astride the chords, rather than attempting to cut through them or subjugate...

This contributes heavily to the persistent airiness and forward, climbing momentum, even if it's hardly a show of prowess. Like Quorthon howling at you from the opposite side of a fjord or mountain, or like being carried directly on the wind of the raging strings. Though the preference is for faster material once the harder guitars enter a song, he does have some slower, rolling sequences like in "Summon the Storms" where the bass becomes this flood of warmth beneath the distortion. Granted, I wouldn't be opposed to hearing even more variety, but just that raw nature of the vocal and guitars allows for plenty of atmosphere to escape into, and once again I stress the seasonal spirit the music inspires, even if it's not so overwhelmingly frigid this time around. I enjoy this, and everything else I've heard by the guy, so if you're curious to hear a slightly different, windswept interpretation Scandinavian black metal circa the mid-90s that doesn't involve breaking out your copies of Blood Fire Death, Battles in the North or Vikinligr Veldi for the thousandth time, then this is well worth a try.