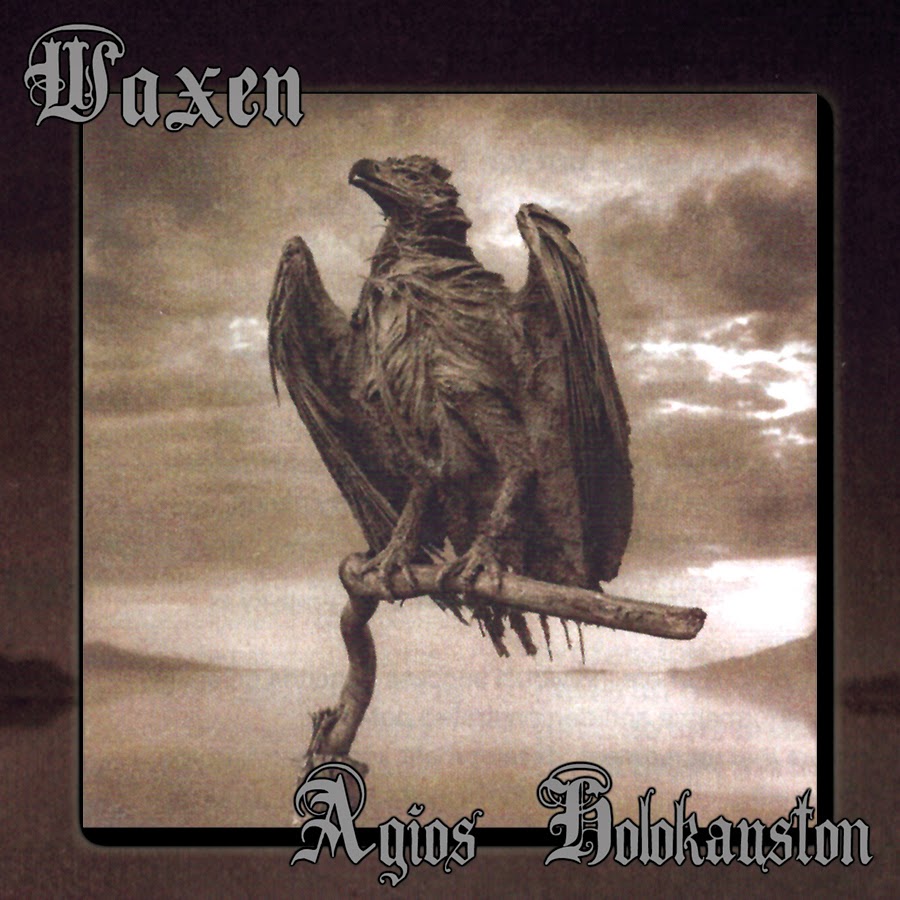 Toby Knapp might be best known as a guitar virtuoso of some repute, and for his work with the Century Media power metal act Onward earlier in the millennium, but the guy has ever been a genuine lover of extreme underground metal, and Waxen is not his first dance with the stuff. There was the tech black/death project Darken, and his team up with ex-Vital Remains vocalist Jeff Gruslin for the second Godless Rising album Trumpet of Triumph, which was pretty good. Here he's gone all out 90s black metal, which I was anticipating since I think his guitar skills might lend a lot of musicality that you don't otherwise hear very often in a very rhythm-guitar-grounded genre like this. In the end, Agios Holokauston does present us with some vivid composition work, but I can't say it feels distinct enough to evade the confines of its medium or really register much personality.

These are some of the most rancid, raw rhythm guitar's he's worked with, so there's an air of suicidal post Burzum black metal which is then driven home by batteries of electronic drums, squelching rasps that are faintly audible as support for the guitars, and then a slightly more eloquent countermeasure of melody and dissonance than you're going to hear off the garden variety bedroom band. Harmonies abound, embedded in the sick filth of his tremolo picking, while there is this added layer of ambient, shining texture supplied which was frankly my favorite contrast of the music. On occasion he'll hit this cacophonous fit of tempo shifting and violence where his vocals are really prominent, and this gave me a Deathcrush vibe which I enjoyed, but this aspect of his performance seems inconsistent throughout the 36 minutes. There are also a number of slowly developing, soul-leeching slower dissonant passages like "Hollow Eyes" which never seem to transmigrate into something truly devastating, despite the initial promise they show.

At any rate, Agios Holokauston can't be accused of lacking some versatility and genuine pathos, and if you've ever found yourself wondering what a Leviathan or Xasthur effort might sound like if written by a guitar god with a trad heavy metal background, I can't think of many more examples beyond this. It's lo fi enough to sate those seeped in underground obsession, but at the same time that could be a turnoff for those wanting more highly developed black metal, which is not exactly Knapps' aim with this project and that's fine. I was in rapture for a few tunes, but losing interest elsewhere. Don't let this serve as a discouragement if you want to experience raw black metal with an angle, but I think some further time in the think-tank will likely serve Waxen well. I don't remember the debut Fumaroth enough to make a substantial comparison, but I feel like that album was stranger in disposition. Nonetheless, this is unfriendly, agonizing extremity that falls somewhere in between Burzum's pre-prison catalog and the Nattefrost solo records; worth a listen once but I will make no wagers that you'll want to hear it twice.