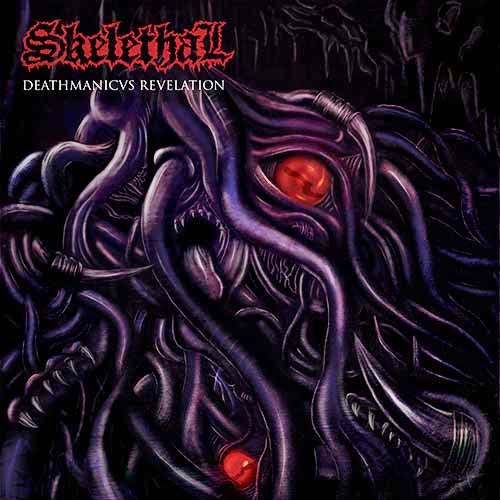 I haven't heard a ton of French entrants into the old school death metal craze of late, but those I have, like that Cadaveric Fumes demo a few years back, have been quite worthy; Skelethal proving no exception with their Iron Bonehead debut Deathmanicvs Revelation. This could be considered raw, unseasoned material revealing a connection to the very roots of the style, though with an uglier production quality that somehow grafts additional personality on the barebones grooves and almost grind-like intensity. I rather felt like this had been recorded in a warehouse or empty studio apartment where a lot of natural reverb gave the songs a remote, distant quality about them without sacrificing my ability to perceive the individual chords and instruments.

The intro is pretty cool. Pianos and bells and haunting ambiance wrought from any cheesy Gothic horror fantasy, and then the band clubs you with the very opposite of elegance. Lots of trotting, march-like guitars with brief spurts of death/thrash and the aforementioned uptempo bursts where I almost had an impression of late 80s Napalm Death. There's also a sense of Swedish momentum with some d-beat-like rhythms and the raw, barbaric tone of the guitars, though with that far-off production style it definitely doesn't come off like the usual Entombed/Dismember clone. The bass guitar is faintly audible alongside the rhythm guitars, but that's largely because the knobs aren't tweaked to provide a ton of low end; it's all to sound as if it's being filtered at you through the environment, cavern-core to the max but we're talking a massive subterranean space as opposed to a small nook or alcove. Therefore, it doesn't seem to suffocate the listener nearly as much as some of the other bands touting this style, which is welcome...though the production choices here are not going to appeal to audiophiles who want everything warm and clear.

Structurally, this isn't the most interesting or unique stuff, with a bevy of riffing progressions culled from the Swedish golden age, peppered with some Autopsy or Floridian influences via Obituary or Death. Vocals are a low roar which can't really be distinguished from a dozen or so other bands. If you are jaded on this particular style (and on most days I am), then Deathmanicvs Revelation is going to leave the impression of a 'me too' sort of band in an already saturated medium. However, if you've got room left in the crypt for another ghastly denizen who keep shit painfully simple, brutal and atmospheric, then you could do a lot worse than Skelethal; and ultimately, this EP's coldness and purity work out in its favor. It's nothing amazing, or even really good, but consistent and effective. Also if you have a fetish for Tentacled Things From Beyond, the cover here provides yet another pinup model for you to obsess over.