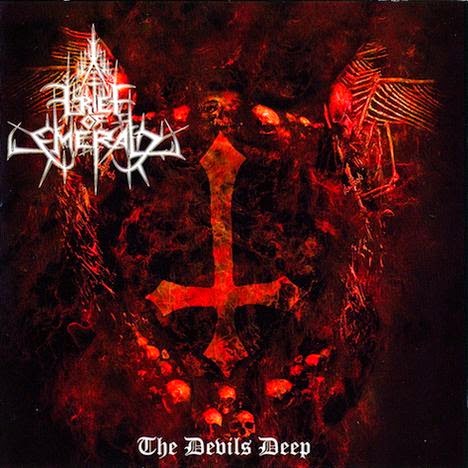 My heart was hardly broken when Grief of Emerald took a seven year dirt nap, but nor was I really surprised when they returned a half decade later to produce a demo recording that was essentially 50% of their forthcoming fourth opus The Devils Deep. It's a little disappointing that all this time was put to poor use, since the material here is vaguely distinguishable from even their 1998 debut Nightspawn, and yet I think the subtle advancements in production techniques paired up with their already sharpened musical ability to produce what was possibly their most 'accomplished' record to its day, or at least the best looking, since it has the first cover art I actually thought was pretty cool.

The Swedes always suffered from the fact that, despite their general level of competence and proficiency, they were essentially a retread of many other bands who released music like this when it was freshly infernal and resonant, albums that still spin in the regular rotations of a million extreme metal fans to this day. So if The Devils Deep would have already seemed generic by late 90s standards, what does that make it by the Anno 2011? Clearly there has been no popular retrogression back towards this style. A few other Swedish bands like Watain had championed the more Dissection/Dark Funeral-esque style to some degree of notoriety (more through their inconsistent and confrontational personalities than some of their music), but the genre as a whole had moved on to other territories...depressive black metal, 'blackgaze', or folksy, veiled Nationalism. A disc sounding like The Devils Deep was never in high demand, and yet, there are certain nuances to the material here which allow it to surpass all the older albums through Listenable.

The sound is tighter and sharper than any since arguably their debut, with a lot of those razor-snake riffs and melodies compounded into punishing fruition with another tireless battery of blasted and slower contrasts. I felt like the lead-work in particular here was the best they'd yet recorded, parting a veil to reveal another level of malignancy in composition, and the decision to toss on a few soaring, cleaner vocals is also managed rather well. The level of structural variation here also reached a new peak, though there was still a tendency to lapse into derivative and predictable riffs during blasted sequences which almost make everything else more compelling by association. However, there are at least a dozen sweet riffs in among the lattice of the forgotten, whereas the keyboards have more compunction and resilience. When Grief of Emerald fire on all cylinders here, they can at least stay in the race with much of their competition, and though three of the seven tunes are mere re-recordings from the first two albums, these versions are very much superior. Not a good album itself, perhaps, but The Devils Deep is adequately seasoned enough to taunt that the Swedes were capable of writing one.

Verdict: Indifference [6.75/10] (there the blood of the ancient boils)