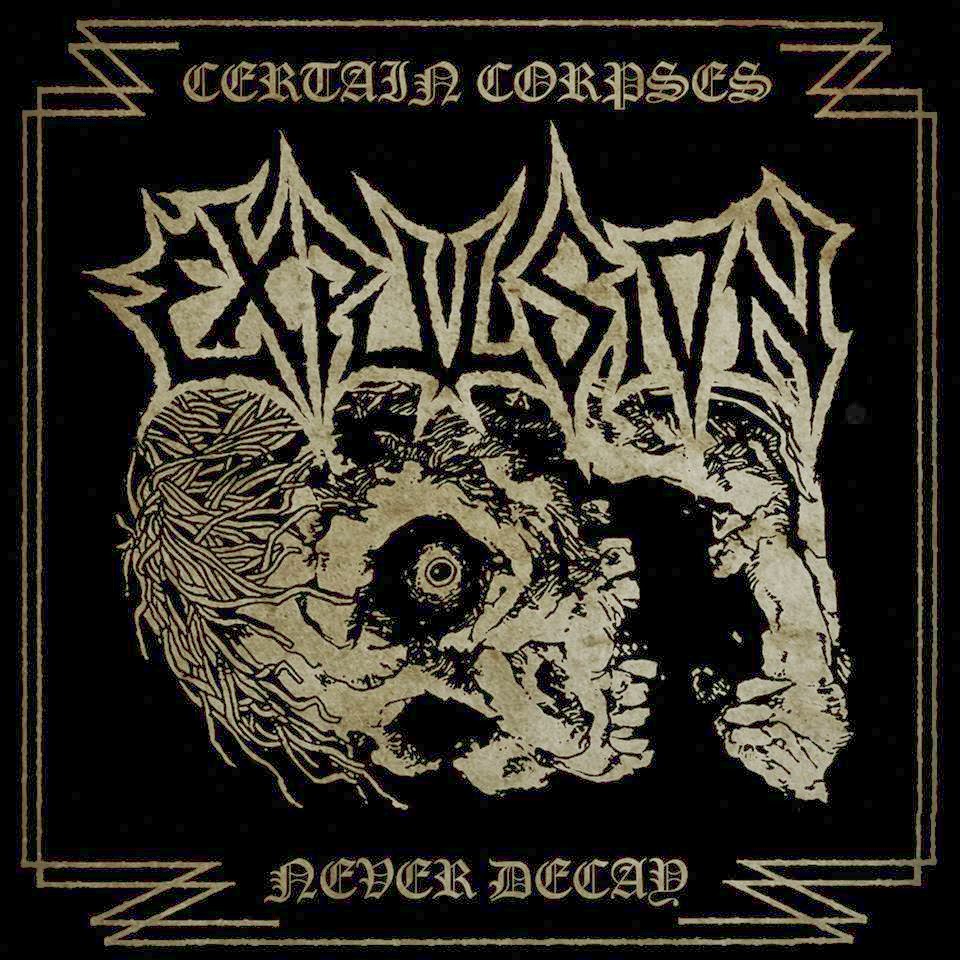 Is any Swedish stone yet unturned at this point? Must we till the soil, and find the rocks buried underneath? Apparently so, and thus Vic Records has excavated the 1989 demos of Expulsion, a band with relations to the whole Tiamat/Treblinka family which went on to record a handful of forgotten, ill-received records through the 90s, but once performed with a very authentic death/thrash roots aesthetic that seems fully in line with what a lot of underground purists seek out these days. I'm at a point now where my own enthusiasm waxes and wanes for these sorts of releases; on the one hand I get a chance to add some long forsaken gem into my collection, on the other you can kind of see why some of this stuff never broke bigger in the first place...

As for Expulsion, their Cerebral Cessation and Veiled in the Mists of Mystery demos seem to fall in between these poles. This is pretty crude material with riffs that should have been considered average even in their day, and yet it has that general authenticity and innocence which existed prior to the redundancy of their sound. Harshly barking guitars woven into threads of Napalm Death grinding bursts, thrashing mid-paced chops and even a few sluggish grooves redolent of something else British like Bolt Thrower, complete with the mulish little guitar fills at the end of phrases. There's also a heavy doom aesthetic here revolving around some of the slower, drudging riff progressions which remind me of Candlemass if they'd had a primitive black/death metal frontman rather than the operatics of Messiah Marcolin. Thanks to the bloody, hacking vocals here, there is an internal consistency through the demos, but otherwise there might be a little of the disparity we heard on the earlier Tiamat recordings, where the band couldn't quite lay its roots in any one niche, and so explored them all through a dynamic, occult atmospheric blend of seminal extreme metal.

Alas, the songs just aren't nearly as poignant or timeless as those on Sumerian Cry or The Astral Sleep, and so I'm just sort of left appreciating the material for its stark simplicity and hopefulness of transforming into something more. There are a few points at which the songs sound like barely brushed up rehearsals, and others where they delve into a solid, morbid chord progression somewhere around Autopsy or Treblinka in architecture, with crud coating the rhythm guitars and ugliness aplenty, which even the sparse acoustic guitars cannot effectively pierce. Cool for collectors and completionists that had yet to add these to their catalogs, since to my knowledge they haven't been released before (with the possible exception of online rips), but I can see why this probably didn't generate much interest in the first place. I'd also say, that if you're not opposed to a richer production and songwriting more similar to fellow Swedes Cemetary or Lake of Tears, their 1994 full-length Overflow might not be a bad place to start instead. I was never really into that, nor am I feeling these more primal origins, so I can't highly recommend any of it; their material with the other eventual bands was more my style.