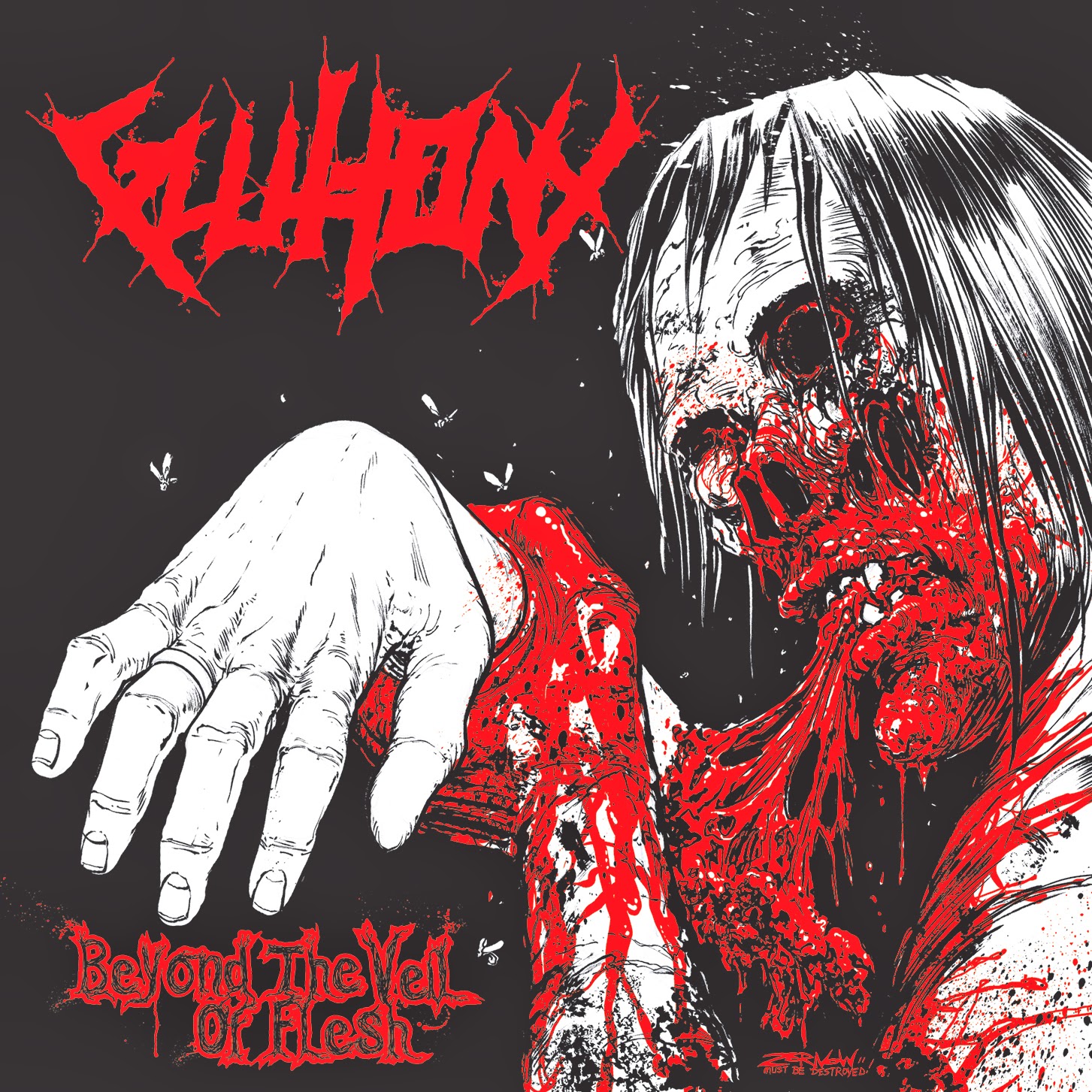 As soon as those repulsive, punchy guitars and d-beats arrived to inaugurate "The Revenant", I knew Gluttony's full-length debut was going to face an uphill battle to distinguish itself among the myriad of backwards Swedish bands making their rounds. I can imagine there must be some incredibly devout legion of fans out there who have absolutely no qualms with half their record collections sounding exactly like the Entombed, Dismember, Carnage, or Unleashed albums that they enjoyed in their youths (or their late metal blooming); however, I cannot count myself among them, and have grown increasingly wary with a bunch of bands that seem to progressively show less remorse over living as knockoffs to the original sound. Occasionally, there is a well wrought gem among them, but Beyond the Veil of Flesh, for all the sincerity of its production, is not one of these.

Honestly, it doesn't even seem like this group had an iota of imagination in even conceiving the song titles here, because if they've not been used 100 times before, then they're just paraphrased from those that have. Rhythm guitars are chugged in banal patterns that couldn't have taken more than a few minutes to arrive at (they seem to have run with the first ideas rather than played around with note possibilities), and there was not even a single progression of chords anywhere on the eight songs and 30 minutes which would make me remotely regret just playing Left Hand Path, Dark Recollections or Clandestine once more, albums that seem obsessively creative when compared to this despite being over 20 fucking years old! Drums sound great, and there is effort there with the rampant fills attempting to fill out such minimally competent riffs, but they're incapable of carrying an album to themselves; as for the bass, it seems too busy being teabagged by the guitar lines to matter beyond adding just that subtle level of grit. Speaking of which, the vocals are just more L-G Petrov/Matti Kärki, maybe more gravelly or garbled but not by a large margin.

I'm afraid that just looking and sounding the part is no longer enough, and that I'm on the precipice of not covering these sorts of throwback Swedish death metal acts, until more bands come along that actually do something of note with the inspiration (ala Morbus Chron, Tribulation, Necrovation, etc.) Seriously, this might be the straw that broke my camel back. You could do anything to make this more interesting: a capella vocals, ska parts, pop melodies, you name it, it would seem like less of an affront than persisting in such a safe, sterile environmental. When I saw Gluttony's logo and cover art, I was crossing my fingers for something truly visceral, horrifying and morbid, but this has got to be one of the most contrived recordings to visit my desk lately. Even among the company of doppelgangers like Entrails, Miasmal and Revel in Flesh, this is just so uninspired...or TOO inspired, to stand out. I understand there is no harm intended, and they just wanna join in the fun of their forerunners, but you'd honor them more by taking that groundwork they laid and transforming it into something juicy and palatable. Back to the drawing board, or more appropriately, the zombie clawing board, and try your arms, hands, fingers and throats at something fresh. Not this.