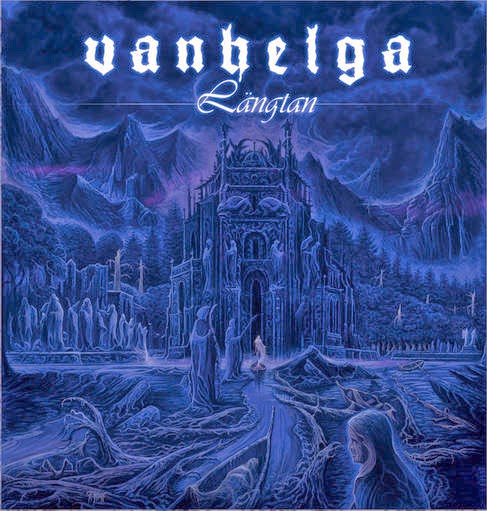 Though these Swedes have been around since just after the turn of the century, and started getting active with releases around 2010, I hadn't actually heard them until I sampled their Sommer EP last year. From the looks of the band in some of the pics I've seen, I had expected some really psychotic, fucked up black metal, perhaps of the Lifelover or similar depressive variety, and to be honest that style of off-the-hinges, emotional resonance is not entirely absent from this material; not all that much a surprise since there is a former member of that band in this one. The difference is that I felt like the vocals here feel even more bizarre and disjointed, especially where the guy spits out some echo/delay barks over an otherwise calming, melodic musical progression.

The drums here seem intentionally mixed to sound about thin and faintly perky under the oppression of the truly raw, cruddy electric guitars. Interestingly, though, the riffing sequences have a more glorious feel than you'd expect, even though the tinny little melodic wails are woefully simplistic and predictable. A lot of clean guitars are mixed in with the harsher distortion, which really gives the record a garage appeal that is sure to annoy some who want a more level sense of production. However, in the context of the maddening, raving vocals which are soaked in delay/echo and make all sort of irritating syllabic gestures, it seems to make sense to keep the recording as cheap and dirty as possible. That said, where a lot of other Scandinavian bands of the black metal persuasion tend to go for a more malevolent bent, Vanhelga just sounds slightly insane, at times like they're the only ones in on the joke but at others moodily effective and haunting. Songs tend to be similar in structure or instrumentation, but vary in length and riff count pretty broadly, with some of the best moments being where the guitars just ring out over the raw undercurrent...

Anyway, this is ultimately a weird, left-field experience where particular emotions are vomited forth to the fore and then rescinded into the madness of the musicians. As songs, these didn't really work for me on an individual basis, but if you just wanna laugh or cry for roughly 70 minutes then that seems to be the point. Slightly suicidal, yet in a strange way that keeps the listener guessing what might happen next, even though Vanhelga do stick to a particular set of arrangements that slowly curb their surprise potential the deeper into the track list. Still, some of the pure acoustic sections are quite nice, I just have a problem taking the vocals so seriously, even when I'm used to this alien approach. Fans of Lifelover, Woods of Infinity and Terra Tenebrosa might wish to give this a try if only because this style of joyous dementia has become increasingly rare with the dissolution of its former practitioners via tragic deaths. I was more affected by records like Konkurs and Erotik, personally, but this is close enough that some further refinement, or perhaps more unusual songwriting could fill this band into that open void.