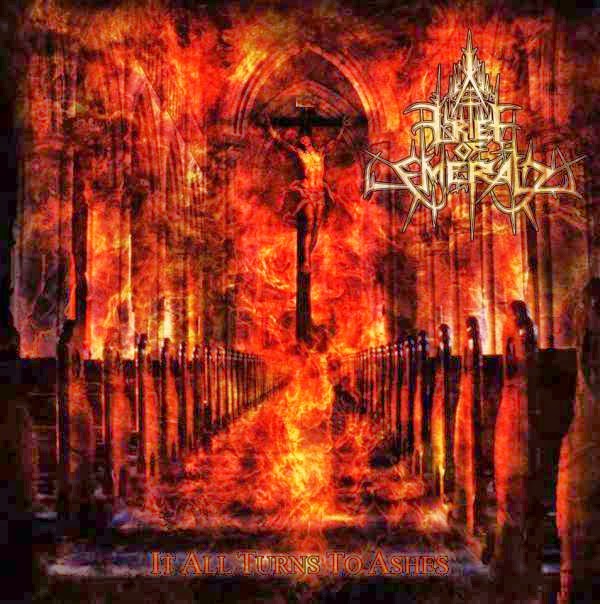 Keeping a review to a concise length is no mean feat when the cover artwork speaks to just about everything you need to know about the musical content. Fire and blasphemy, hatred of the holy, Grief of Emerald seem about as sincere and serious about its sacrilege here as anywhere else in their career. The Swedes' sophomore, and fifth album overall, through Dutch Non Serviam records, It All Turns to Ashes is quite likely their most professional and musically evocative offering, but 20+ years into a band's existence I don't think it's unreasonable to expect a little more distinction and personality, which is sacrificed here in what could be best described as an attempt to compile all their tricks and techniques over the prior four albums into something simply 'better'.

In all fairness, it really is. Namely, the production has hit another plateau, with the crisp and forceful tremolo picked guitars hitting their stride in most of the band's most involved and ear-sticking melodies to date, while the synthesizers embedded into the atmosphere are mixed with more of an airy grace, using a lot of similar pad/organ sounds as on the earlier material, but seemingly more nocturnal and scintillating. Grief's flaw was never the band's actual musicianship, and they further exemplify their grasp of technique with a firm balance of faster paced, blistering note progressions that erupt into convulsive, percussive palm muted patterns and leads imbued with an exotic Eastern mystique. It All Turns to Ashes might not be stuffed to the fiery gills with solo work, but I like how these guitars are slathered and squealing over the meatier rhythms with a more defiant rock & roll attitude, and yet never steer the listener's attention away from the feisty, brutal momentum of pieces like the mighty "Warstorms" or the title track itself, amongst a suitably varied lineup.

Of course, when you break down the riffs further, the patterns seem like a standard admixture of the lines populating the busier tunes of Cradle of Filth, Marduk, Lord Belial or Dark Funeral around the dawn of the millennium, played firmly and with precision but never truly imaginative or compelling to develop an identity. This dearth of nuance extends to Johnny Letho's vocal rasp, which is likewise pretty commonplace among the Swedish legions, and lacking the more sinister decree of black metal frontmen who leave you with an unmistakable impression that they've been damned below the surface world. In fact, It All Turns to Ashes is really all surface stuff; speed and flash and little depth of malevolence. Just because consecrated ground is set ablaze here, doesn't mean I think these guys have much of a concern for the subject matter beyond the fact that it fits their musical objectives. This is without question their most accomplished effort, likely to sate those who retain an investment in fast, clean, proficient Scandinavian black metal, and the one to check out before any others if you're new to them, but that doesn't preclude the interested party from checking out of their catalog once these particular altars are cinders and the priest have been run off.