Pact - The Infernal Hierarchies, Penetrating the Threshold of Night (2014) 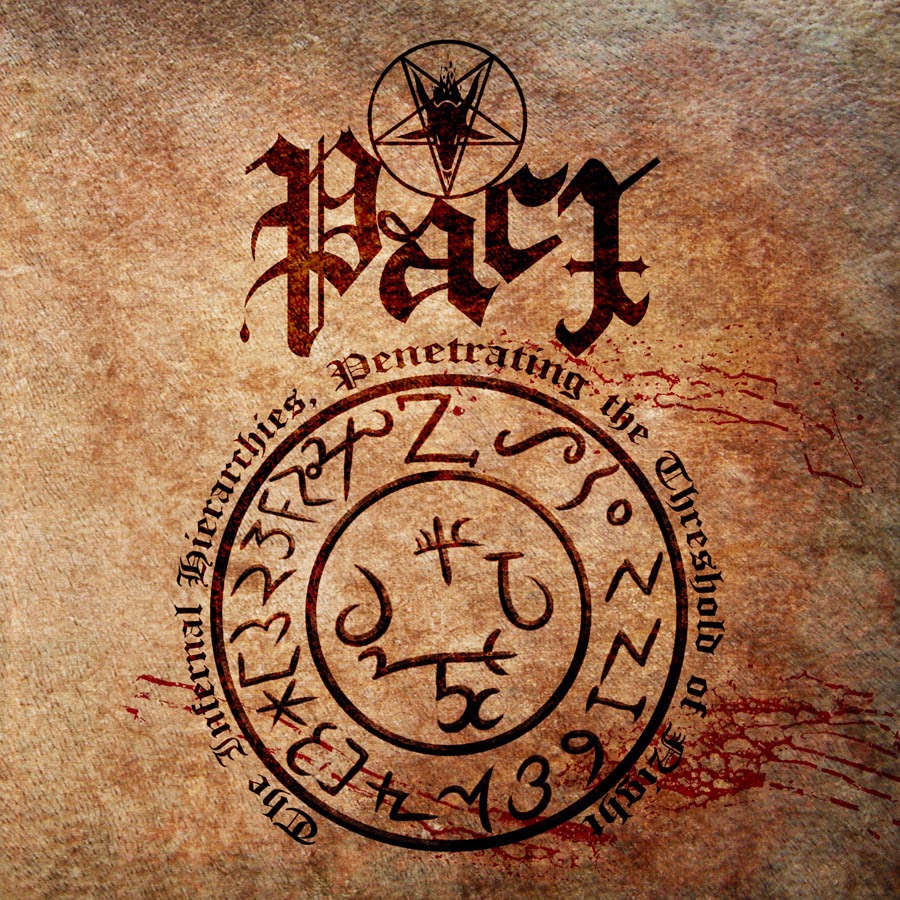 Once these particular birds of prey have discovered the proper tactic to tear out your throat, they don't seem very keen on changing strategies; so you can expect that this Pact sophomore The Infernal Hierarchies, Penetrating the Threshold of Night leaves much the same carnage behind it as did their debut The Dragon Lineage of Satan back in 2012. That's both a good and bad thing, because while they join the ranks of the dependable and devil-driven, one might have hoped for some degree of evolution, variation and atmosphere to shape their sound towards the future. Painfully little of that, this is just a lot more paving of the road to Hell with ill intentions, and unfortunately the riff selection here just sort of wafted through one ear and out the other, leaving a sufficient beating but nothing extraordinarily memorable behind that I would deign to recollect very often.

That's not to detract from the confidence and competence here, the monstrous chords threaded with minor dissonant open string pickings, war-march drum cadences suffused with spleen-rupturing blast beats and double kick storms. Thick, present bass-lines, and a little bit of muddier chugging when a song calls to beef up that bottom end. A singer that continues to use a bit more guttural timber than the rasps generally associated with his genre, but they also thread in a number of those for support, to sound like a convocation of abyssal spirits. I definitely feel this retains that redolence of Bathory, Mayhem and Marduk if they had in turn pledged their unholy allegiances more directly to the war metal throne of groups like Blasphemy and Bestial Warlust, but with the added boon of a more fulfilling, modern production style. Other more recent  comparisons might be made towards Averse Sefira or Denouncement Pyre. Still, while a busy and incendiary album by all accounts, The Infernal Hierarchies... does lack the subtleties and advancements I might have hoped from the first record, an issue I might not take if I could find a few more riffs here that interested me for more than a handful of passing listens...

Really, Pact is for those who want a rush of fuel and absolutely no forgiveness, a vision of the Underworld as as the domain of tyrants who clutch their gauntlets in steel might and let the blood run down their cheeks and chins while they sup on the souls of those that pass through the Leviathan's gates. Its suited to a war against Heaven's host, where you're so locked into the combat mentality that all the dying and flailing of angels and fiends around you blends into this one, cohesive blast of fear and fate, and it just doesn't concern itself with anything innovative or, ultimately, interesting. That's not to say there isn't an acceptable level of deviation with the more mid-paced floods like the opening of "Pactmaker Lucifuge", or a number of bridges over which the baleful, minimal behemoth leads wail into the frenzy, but it felt like such a stock black metal experience this time around that I couldn't get much out of it. Lots of aggression, a fiery production, and very little else in the shadow of these horns, possibly worthwhile to purists that enjoy the faster European style (Dark Funeral, Watain, Belphegor, Marduk) but I felt like that first album was bloodier and catchier.