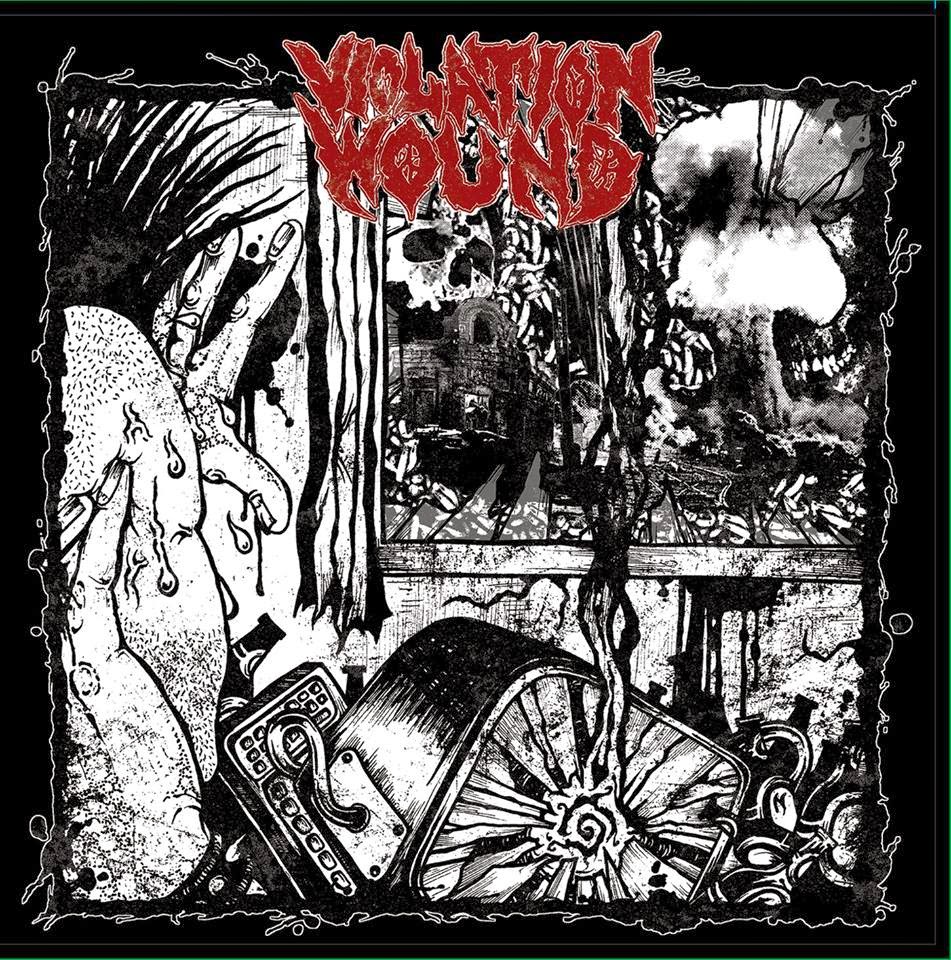 Violation Wound is raw metal-punk interpreted through the imaginations of Autopsy god Chris Reifert, bassist Joe Orterry (Zombie Holocaust) and drummer Matt O'Connell who had previously played with Orterry in another band called Fog of War. The project was formed quite recently in the summer of 2013, and so what we're hearing on this debut album is actually some fertile ground which has had only a modicum of time to properly develop. And that suits the trio's M.O. well, because the fuel here is pure riffing punk aggression with perhaps a fraction more depth than you're going to find from some awful Orange County sunshine pop garbage. That's not to say this is entirely inventive or left of center, but it's dirtier than usual with some inbred appeal to fans of crossover and splatter core....whether that's Cryptic Slaughter or The Exploited.

Now, I am one picky mother fucker when it comes to punk rock, far more so than with death metal, and almost all my favorite stuff in the genre hails from the 70s or 80s when you could pull out those trite 3 or 4 chord patterns and rock my face off with a distinct, charismatic vocalist. Since then I've leaned more towards the Gothic or post-punk niches due to their propensity for more creative riffing, something that seems to elude the vast majority of 'true punk' bands no matter how much alcohol they can down, how many car windows they can kick in. To me, 'punk' is rather self-defeating when instead of rebelliously shaping music, so many acts are just recycling the same boring riffs we've been hearing over and over since they were stolen from rock & roll in the 60s/70s. But if a band seems dirty enough, passionate enough, and just a little bit out of the box, I'm usually forgiving enough...I'm not sure I can be with this album, because while for all intensive purposes it's meant as a fun, expendable experience, the 2 minute or under tunes are plagued with generic chord patterns that don't seem particularly exciting, and might have been with a little more effort.

I say that with the caveat that: 1), Volition Wound is not at all a 'bad' or annoying first attempt, and 2) I think it works quite as intended by Chris and his companions. There is constantly an audience for these sorts of cruising, cruddy riffs and this might well be celebrated by crusties, skaters and disaffected death mavens the world over. As advertises, it's honest and simple and ugly as fuck, soaked in beer and sweat and so it gets that part of punk or hardcore proper. I actually dig Reifert's growls over the brighter, sunnier punk chords, a cool contrast, but I'm far more into what he does within Autopsy. The bumping bass lines and driving fills here don't add much personality, but plenty of enthusiasm. 18 tunes, 26 minutes, not a lot of depth and none was sought: a pretty straight paean to the forefathers of the style, whether that be the Stooges, the Misfits, the Damned, Black Flag or Minor Threat, and for some this is going to prove enough, but others like myself who want to hear punk music invested with something hellish and unique will have to seek that out elsewhere.