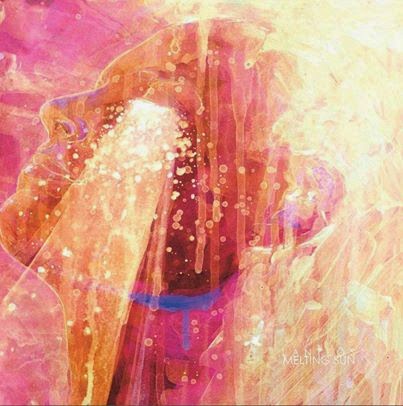 Although I had become decreasingly fond of Lantlôs over the course of Herbst's first three albums, Melting Sun is one of those records that offers me affirmation as to why I often stick with bands when I think they might have something hidden in there which has yet to surface. Granted, the last one I experienced (Agape) was more or less a creative coma of dull ideas. This project was by and large surfing on the trending wave of shoegaze oriented black metal expatriates, with nothing more to show for it than meeting the laws of supply & demand, to the point that Neige of the tragically overrated Alcest himself was involved, but it seems that after nearly a decade of gestation, Lantlôs has at long last settled into a comfort zone and begun to produce some quality assurance.

Disclaimer: this is so barely metal that I'd sooner just categorize it with the post, indie and space rock waves of the mid 90s, the black-tinted riffing progressions now a thing of the past, though you might pick out a few tremolo picked guitars or drudging chords which can frankly belong to a number of rock genres. But that's quite alright, because like its title hints, it provides this fulfilling, warm cycle of emotions which brings to mind Chicago abandon-rock darlings Hum from when they had a few singles 15-ish years ago, or perhaps more recognizably a few drop of Smashing Pumpkins' massive alterna-rock bleeding through. Solar flare drifts of brighter guitars careen across the vacuum of weighted chords, thick and juicy bass-lines pumping fresh blood through the glacial rhythmic veins which supply Melting Sun's circulation. Most of these tunes require a little patience for the payoff. Not to the point that they're truly time-consuming, and Herbst reins in the experience at around 40 minutes, but he takes his time in delivering the most heightened and passionate passages above the sailing, soothing strains of ambiance, progg-ish low-end lumps of bass and dreary yet uplifting vocals.

His voice is not exactly memorable, per se, but I think it fits the spaciousness of the music through some of the sustained passages; also helps 'ground' the songwriting aspirations with an everyman quality that sounds like any of your random middle aged neighbors going out to pick up the morning paper and then stopping to ponder a cloud, rainbow or some other unspeakable phenomena of the natural world. Gentler, ambient clean guitar passages and swelling backdrops ("Golden Mind" being a prime example) help round out some of the harder hitting, bulky guitar progressions, and Melting Sun never abandons its central ebb and flow of calm and crushing contrasts, star-tides radiated through the cosmos and soaked into the skins of the living. I would not deem this a massive stylistic departure from any of the previous records I've heard, but it seems handling all the instruments/vocals himself has resulted in more consistent, catchy fare that borders on poignancy, and while it's nothing intensely intellectual or amazing, I enjoyed listening to it...and coming from an individual who though the prior works were middling at best, I hope that means something.