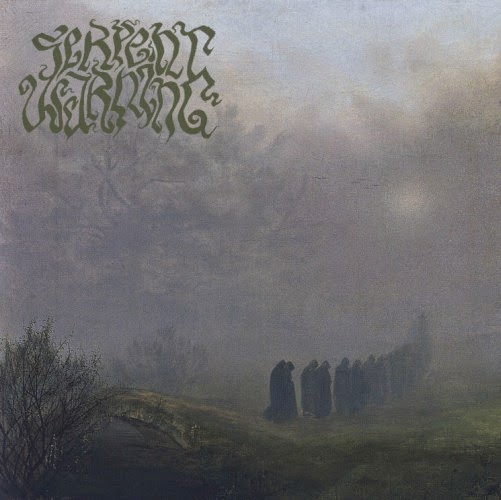 Finland's Serpent Warning provides a prime example of what I like to dub 'laconic doom'; and by that I intend no insult whatsoever, only to best explain the style of songwriting they exhibit upon this full-length debut. Basically they stick to the core rock instrumentation and lay out a lot of slower to mid-paced grooves redolent of Black Sabbath, or by extension seminal doom followers like Witchfinder General, Saint Vitus or Pentagram. Riffing structures are minimalistic at best, often just a few woozy chords played out in familiar patterns, though they do occasionally bust out into a more melodic, upbeat charge. Therefore all moments of tension and release are in how much the vocals and lead harmonies can break out of the zone and offer some edge and abandon.

The production on this is really solid, nothing expressively atmospheric but all the instruments are laid out with equivocal volume and no one factor excels beyond the rest. Guitars are dingy but bright when called for, the bass lines are a thick soup of Geezer Butlerisms and the drums mellow but loaded with lots of march like fills that help compliment the simplicity of the chord architecture. Considering the rather close confines the band performs in consistently through the 40 minutes and six tracks, it certainly seemed like they 'felt out' the style they were exploring; thus there's plenty enough variation even when you might have a slightly hard time distinguishing one cut from the next, but the choruses and melodies expressed throughout all have a unique feel to them so you can get some replay value out of Serpent Warning on the whole. At more than six minutes per song, the tunes each hit their stride and give themselves plenty of space without going over the limit, with the sole exception of the finale "Ceremonies of the Sun" that might start to feel as if it's dragging its feet with about two additional minutes of baggage, ending at a rather anticlimactic point.

I always feel awkward when I'm reviewing a forthcoming record like this and then learn that the vocalist has already stepped out of the band, and in this case Samuel Pesonen (who has performed in a number of other acts like The Wandering Midget) has been replaced by a female, Suvi Laaninen, so you can imagine the band's future installments might have a more idyllic, haunting quality to them akin to Blood Ceremony or fellow Finns Seremonia. However, on this album, Pesonen has a decent, melodic mid range with some weight to it, not incredibly complex or varied but he'll differentiate a chorus or two from the more middling verse lines and there's often some bite or vitriol to his timber which reveals a passion for the style. That said, there were moments where he reminded me more of an angst-ridden modern hard rock/nu-metal singer like you'd find in Disturbed or Godsmack, only with his natural accent shining through. Once again, I'm not offering that as some sort of putdown: I'm not usually into that style either, but Samuel does a real good job here of binding together the drums, riffs and that voluptuous bass into something that I enjoyed spending time with, even if it's not an album I envision returning to a great many times in the future.

Basically, if you're into hazy, rainy afternoon doom which hearkens to a 70s inspiration, but from another culture altogether and having the inherent quirks you might expect from that, Serpent Warning is worth a listen. It's not as serenely psychedelic or bluesy as other acts who operate under a similar mantle of mourning, but they definitely have a persistent flow to them which offers enough emotional texture and food for thought, much like the exiting line of monastic figures on the cover art, wandering humbly through the wilderness, soaking in the mist, beauty, and ultimate mortality of their environs; a pretty cool aesthetic to match that scrawling, classy logo.