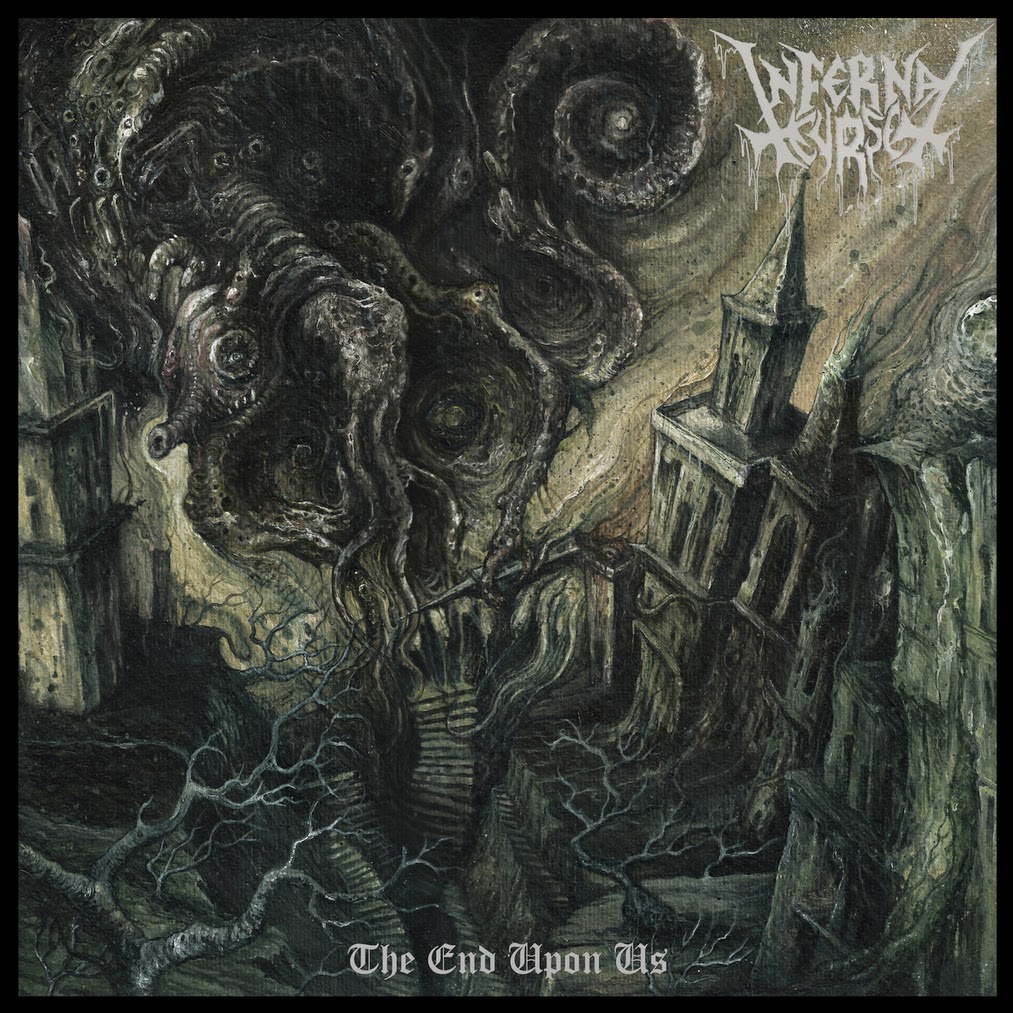 As the pestilent pulpit of old school death metal continues to preach into the ears of more parishioners, the sounds continue to grow uglier and more unrefined, as is evidenced by the latest EP of the Argentinian graveyard union known as Infernal Curse. Similar to several bands from their neighboring Chile, you're being presented here with an alternative accumulation of late 80s/early 90s death metal tropes which have been twisted into something mildly unique due to what might or might not be a more exotic interpretation of the seminal works of acts like Autopsy, Rottrevore, Necrovore and Incantation, though this is restricted more to production choices than musical technique.

The End Upon Us is a great looking EP, with cover artwork that does well to visually ascribe to its musical aesthetics, which are unapologetic in their primacy. Stripped down. Base. Smeared in offal and viscera. Like the unearthing of some dirt tomb where plagued paupers were recently buried alive. You can never quite shake the stench of this from your ears after listening, with voluptuous and bruising bass lines and soiled, smearing chords and tremolo guitars which don't evoke a lot of variation or melody throughout their evocation. The drums seem peppier and able to offer a contrast to the dinginess of the strings, with enough reverb on the fills to lend some atmosphere to the muddy script. Chord progressions are exceedingly primitive and unfortunately don't arrive at any creative ideas; I'm getting to the point where I'm well beyond loving this stuff just because of its purism alone, and when they concede into even more simplistic doom death grooves, it feels agonizingly retread and dull.

A shame, because I'd be much more compelled if they used this same, impenetrable production and then wrote some resonant licks or leads into it which could cultivate the feel of alien, obscure death metal so missing from many of its nostalgia-addicted champions. Infernal Curse has been at this awhile, but apart from the fact they promulgate an even more deformed visage to the music than some of their better known peers, there's just not a lot here that I felt myself wanting to return to. Again, The End Upon Us has that initial, visual stimulation where the artwork and musical goals seem aligned, but then there is no surprise awaiting you behind each leaning structure, each withered limb, each whorl of blackened miasma sucking on the soul stuff of the intended victims. Even the Hadez cover doesn't sound much different apart from the possible chord placement, and while I've heard much worse, the EP ultimately dissolves amidst the blurred, swelled ranks of its fellow retrogressors.