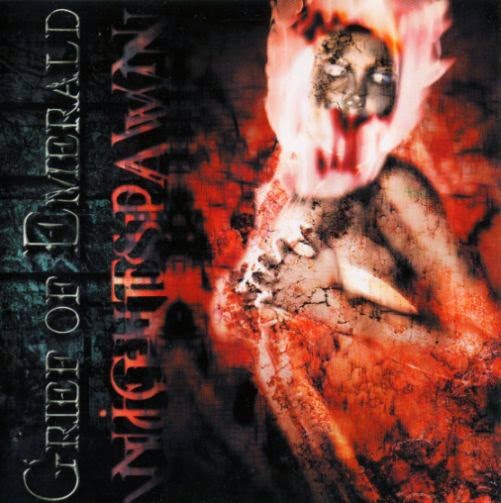 Grief of Emerald is a Scandinavian black metal band lost among so many other Scandinavian black metal bands almost as soon as they left the starting gate...and for good reason. Take a look at this album, and then, say, take a look at Darkthrone's A Blaze in the Northern Sky, which remains so stark and effective, or Emperor's In the Nightside Eclipse; evocative and threatening. Not that I like slagging a record for packaging decisions alone, but even if this were some work of musical brilliance, which it really isn't, the lame digital cover art and choice of non-logo give it absolutely no sense of identity beyond a million modern groove metal or melodic death albums of its day, much less vaulting into the black metal elite. I had no idea when I first acquired this what the hell it was, only that being released through Listenable it was going to be some combination of death and black metal. The band name was bizarre, I'll grant you, but that's unfortunately their most memorable aspect, at least when it comes to the 1998 debut Nightspawn.

Once we arrive at the actual musical content, we're greeted by a competently performed 43 minute burst of precision black metal which falls completely short of distinguishing itself from the Emperors, Dissections, Limbonic Arts, Dimmu Borgirs or other 'symphonic' black metal bands of its day which use keyboards to create a vaster cosmic/nocturnal impression and some tension with the razor-honed guitars. Don't get me wrong, these Swedes can play the shit out of their respective instruments. Riffs are somewhat dazzling and complex and flying all over the atmosphere, while the blasted drums are tireless and responsible for much of the belligerent ballast. Just about everything on this stage is set for a tremendous career of potential, but where Grief of Emerald could not compete with their myriad peers was in summoning up some semblance of personality or uniqueness. Every riff choice, every rasped vocal battery, every keyboard pad is more or less a composite lifted from a few dozen albums that had already hit market, and while they did well enough to try and straddle between the atmosphere of old Covenant and the sheer intensity of countrymen Naglfar, and really this feels like a group of session musicians from other acts just got together to impersonate them after being handed walking papers...

To be fair: it's far from terrible as a debut, and I've got rather a soft spot for this old 'night-sky', haunted castle sort of recording which carries off my imagination to old Dungeons & Dragons adventures or pagan alternate universes where demons reign over corpse-painted barbarians. But even then, there are just too few riffs which stand out, and considering how many they throw your way over the course of the nine tunes, I would have expected a few left hooks that justified the remainder. Instead, it's just a seamless showcase of banal tremolo picked chords or single note streams, occasionally dispersed with slower, dissonant shining chords that are no different than many of their peers. Lyrics are quite similar to other Swedish bands like Dark Funeral, Lord Belial or Marduk, that is to say decent if not outstanding. The vocals are nasty and impassioned enough that he doesn't seem to be fronting, but the album very badly wants to come across as evil or menacing and instead it seems like filling out a black metal connect-the-dots book hosted by some ghoulish mascot throwing you the horns. Almost like a proto-Dethklok without the failed humor, everything about Nightspawn screams 'me too guys, surely you have enough space in your hearts for another Norsecore band! We're totally legit!