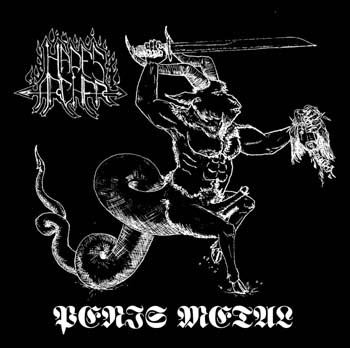 Not the deepest of dickings, nor a particularly memorable one, because by the time you're about to climax Hades Archer has already expended itself and moved along to the next willing victim. That said, if you're into a rough ride with your blackened war-metal, I can promise you that there's absolutely no romance or foreplay with this EP, just in and out thrusts the pitchfork as your ears are creamed with a violent load of functional blast beats, harsh rhythm guitars which have all the complexity and nuance of a gaggle of grinding sluts you could find in any inner city, and ravenous rasps and barks that talk dirty to you about the Devil's host, bestial acts involving his pet goats and hounds (maybe both at the same time), and a whole lotta damned souls, dead rising, fire and blood.

Arguably, this brand of ultra-violent Underworld bloodlust blew its wad about a decade prior, when bands like Impiety, Impaled Nazarene, Blasphemy and Bestial Warlust took it to its logical, licentious end with an orgy of rehashed thrash, death, punk and heavy metal riffs played at X-rated, savage speeds where the only given atmosphere was its own coked up velocity. There's almost nothing present on Penis Metal which really distinguishes the group from its skull-fornicating forefathers, apart from a few español chileno lyrics. Having said that, it's my experience that a lot of studs into this style don't give a particular damn. Fuck and forget, throw the horns, strap-on your bullet belts and pentagram necklaces for a night and there goes the goddamn neighborhood! Only with less Ice-T. It took longer to read the band members' stage names than to make up my mind on this music, and that's never a good sign! It's little more than pure, testosterone-driven blasphemy predicated on a passion for barbarism, misanthropy, and 'because we can' attitude that precludes much of an chance at any poignant songwriting or malevolent nuance.

That's right: it's not nearly as demonic as it wishes it were, and that's a symptom most bands like this just can't overcome. No patience. Coitus inter-ruptured. Premature e-jerk-ulation. The rhythm guitar riffs lack any semblance of creepiness or diabolic, compelling note placement, nor do the frenzied leads which careen across the chords like drunks fiddling their zippers. Variation is all but alien to this duo, they have clearly not consulted their Kama Sutra and insist on just one position, which transforms the pounding drums into a monotonous, incendiary clamor and makes me quite happy that this was such a short session and you can move on to a more virile client. The super smutty secret Sodom cover circa 1986 is actually the best thing about the EP, because it showcases the mark bands like this are aiming for and falling short of, without any need to consult other sources. Hades Archer improved their libidos considerably for the later full-lengths (For the Diabolical Ages in particular is pretty fun), but Penis Metal is a spent contraceptive full of wannabeEvilSeed lying limp in the sewers of Perdition, just beneath the Moulin Splooge.