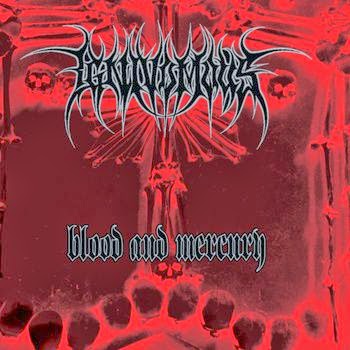 I've seen discussions which place Ignivomous uncomfortably close to being waived away as an Incantation knockoff, but even though I think that's such an obvious influence in their sound, I have really enjoyed the total package of what this band brings to the table. Their influences have themselves moved on to a more accessible (but still excellent) sort of songwriting aesthetic, and Ignivomous simply takes a healthy heaping of that cavernous, turbulent early to mid-90s NYDM, slathers it in some Finnish viscera from the same time period, and then produces the audio equivalent of sentient, roiling magma that wishes very much to consume its listeners flesh. Otherworldly, hostile and consistent are all qualities that come to mind when experiencing their debut Death Transmutations, and so too do they apply to the earlier material featured on this comp.

Blood and Mercury is more or less a 'perfect' collection of the band's pre-full length recordings, perfect in that it spares a lazy arse like myself from having to track them down individually. The Path of Attrition demo (2007), Eroded Void of Salvation EP (2008) and a split track they did with Tzun Tzu are gathered up and presented in chronological order, then topped off with a previously unheard cut called "Corpse of the Redeemer". Nothing unexpected, but low end, grinding death metal with a fibrous, diseased tone to those rhythm guitars which possess an unerring level of anger redolent of war metal bands like Blasphemy, only affixed with the Craig Pillard-like guttural vocals and primal aesthetics more prevalent on the first few Incantation albums. There's a natural dissonance incurred through the tuning and tone alone, but it's not as if the Australians are playing a slew of unusual riffs here, this is all rather straightforward from the blasted side to the more sparing, death/doom passages. Bass lines are engraved into the riff progressions, but there is still a 'hovering' din of the low end over the ripping flesh guitars, while the drums are feisty and energetic but not so polished or soulless as you'd find on a modern tech death recording.

If I were to gauge the quality of songwriting here to that of the debut or its successor, then Blood and Mercury does represent the weakest in their career. There isn't a lot of natural malevolence here, nor are the patterns much more than acceptable for the genre, trying perhaps a little too hard to pass on production alone. Not that I expect a sense of melody when listening through death metal of this style, but sometimes the guitars are too muddied and sporadic sounding to really consider the axis of notation upon which they trudge, so there's a lot of sameness and running on here precluded only by minor production shifts between the releases that make up the comp. I actually found that they progressed in quality, with the tumultous closer offering the more compelling structure with that noisy feedback and distant whispered chanting that arrive in the bridge segue. Death Transmutation wasn't wildly varied, but it was stronger overall, with riffing components that translated into evil signals in my brave and just felt oppressive and so, so ugly. This is ultimately one for the collectors, not as an introduction, but at least they ensured that it was an 'all-in-one' deal and you wouldn't have to further track down a bunch of obscure cuts.

Verdict: Indifference [6.5/10] (your flock of wretchedness)