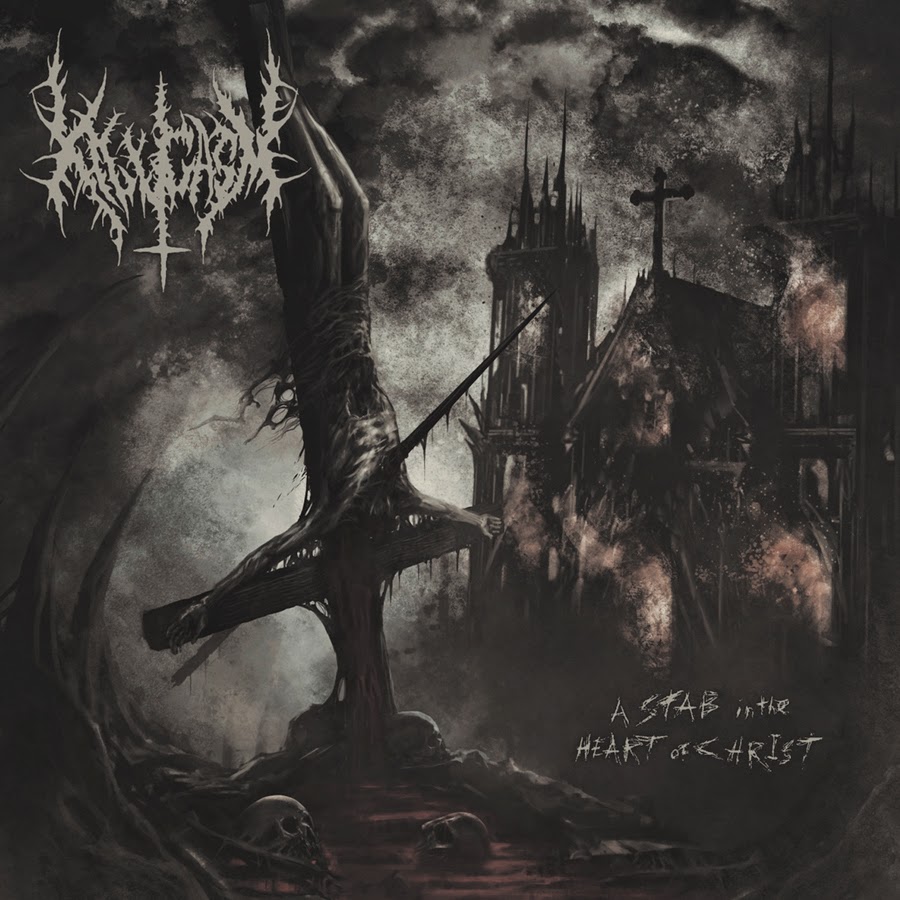 There have been times over the years where I've been flooded with promos for so much mundane, uninteresting music that I've felt my resolve weaken. So I've stepped away, occupied myself with some other form of escape, and then returned with what were hopefully a fresh set of ears. Unfortunately, there is no 'retreat' from just how middling a reaction I could ever form over Killgasm's latest opus A Stab in the Heart of Christ...the riffing patterns here are so banal, so 'been done before' and were frankly so uninspired to begin with that I'm shocked the band members can't recognize the fact...although, if they're doing this on purpose then I guess I've been successfully trolled. A shame, too, for the cover art really seems to promise a repulsive, scathing audio crucifixion.

The Californians play uber-simplistic blackened grind metal, not a formula that many artists can claim to have achieved much success or notoriety with, and you can hear why. To be fair, this is more the former genre than the latter. The blasting is repetitious to the point of droning, with snappy, popping snares. Riff structure is pure black metal, with some really average low chord count patterns interspersed with mildly busier tremolo picked sequences, none of which seem to ever come up with anything compelling or authentically malevolent beyond the fact that they are fast and played with distortion. Vocals are a slightly wilder spin on the standard Scandinavian rasp, but the syllabic flow just seems like a lot of raving and barking with nothing spectacularly gruesome or standout to be found. There is some slight air of atmosphere, with some samples, reverb, layers and dissonance to a few of the chord series; and also a propensity for variety where the savagery will briefly drop away, but so much of this is a banal blast-off that goes absolutely nowhere...

Where they exhibit more mood or texture, usually in a mid-paced environment, they run vaguely less against such bland shores, but even there it's just maudlin black metal without much haunting resonance. The mix of the guitars and drums is fine, but there are no interesting bass lines or samples though the album which work nearly as well as the band probably thought. A group like Anaal Nathrakh tackles this mix of genres with testosterone and explosiveness, threaded with memorable melodies and unforgettable song structures, but Killgasm seem too complicit in its own mediocrity to ever take a successful risk in 39 minutes. I hate to lay it out like that, but honestly is my only currency, and this was one of the least impressive, creatively dry records I've had to sit through in several months.