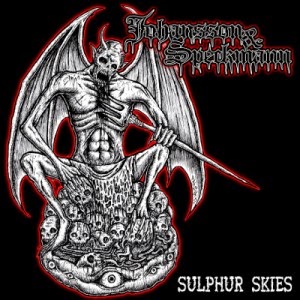 Having already become a one man suburb of the Swedish death metal scene at large, Rogga Johansson has begun complementing his original projects (or not so original, depending who you ask) by partnering up with a few veritable death metal legends. He's already done this with the venerable Kam Lee, and with some success (The Grotesquery), so when I heard he was teaming with the Master himself, one Mr. Paul Speakmann, I paid attention. Now, being that I'm a fan of Paul's vocals a lot more than the music on most of his offerings, and often I really like Rogga's writing a lot (or not, he's just got so many bloody projects), I was immediately interested in the possibility that the best of both worlds would collide here into an album more memorable than...how it looked.

Thank fuck, it is alright! We're not talking an inconceivable amount of effort here, but somehow that ghoulish countenance present in Speakmann's growling seems to get a hellish injection from the playful derivation of Rogga's riffing, which is more or less his usual hybrid of d-beat and Floridian fluidity. Sulphur Skies is far from brilliant, mind you, but had it been written as the third Master album in the 90s, or just some other random record from that period, I think it might hold a sort of cult classic status. Most of the tremolo guitar patterns are rather predictable, but there's just that marginal level of genuine evil in their construction that is so often lacking from the more boring cadre of nostalgia bands. With twelve tracks, I could certainly have done without about 4-5 of them, and would rather the rest had been strengthened up. All are relatively concise at around 3 minutes each, and feature a few rhythm changes and diabolic leads, but the quantity could have been shelved to tighten up even an EP's worth of material with more quality riffing and this could have been something really special among the crowded rebirth of the 90s so prevalent lately.

Got no issue with the sound of it...the vocals just have that usual gut ripping quality to them, unmistakable for any other vocalist in the field. Bass lines are thick, the whole record feels really visceral like a killer stalking his prey, and perhaps more importantly, there's no mercy when he catches up. Riffs and leads are stricken with a rawness that doesn't eschew clarity, so Sulphur Skies sustains its violent ethics even when churned out at the highest volume. I would not have minded some more variation in the songwriting, but then I could say the same for most efforts both these guys have involved themselves with in the past, and it's the reason I usually pick out a few tunes and then find the rest skippable. But, to this album's credit, it's definitely a fun enough ride that you won't always want to escape in the middle of the experience...it takes you right back to those crucial early 90s when death metal had an air of excitement and danger about it, and I think that is what both parties intended when they got together to record it. Well enough done, but if they put out another it'd behoove them to sink a little more time and effort into sculpting a genuine new classic.