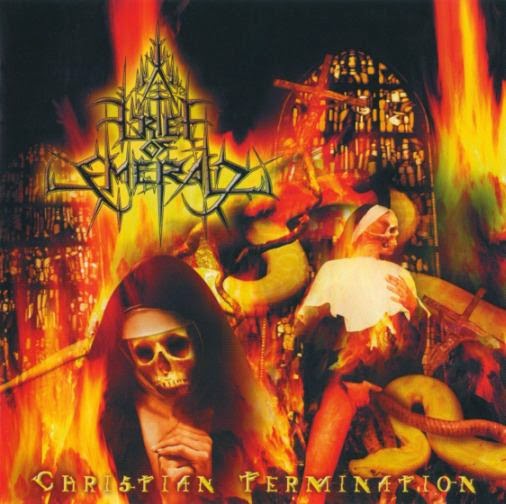 Problems persisted with Grief of Emerald's ability to stand out among a very crowded crowd, but one has to give them a little credit for at least settling down on a few things here, not the least of which are the choice of logo (and a decent one) and more vicious production values of their third and final record in the Listenable deal: Christian Termination. I grant you, the label might have been glad to wash their hands of such a decidedly average black metal execution for the time, but the Swedes did end on their highest note yet and if nothing else, I cannot challenge the level of aggression and persistence here, or the fact that they so boldly wore their sacrilege on their sleeves in a ploy that might have worked to attract more brutal/occult death metal fans into their fold.

The death metal component here is of course understated; you could classify a few of the slower chugging riffs in that category, but this is still keyboard-induced orchestration with a lot of predictable Scandinavian black metal riff progressions which veer between mid-paced simplicity and sinuous, serpentine melodies which sadly are just never that great. I actually dug the ruddy sewage of that rhythm guitar tone, it stands out far more than on the prior albums and made the vocals by comparison seem a lot more grisly and fucked up. Drums were still a power storm of blasts and double-bass, void of subtlety or dynamic range outside of the tempo alone, but they definitely bludgeon away like a lot of the faster Floridian evil death metal via Deicide or Diabolic. If Christian Termination has one notable aesthetic departure from its predecessors, I would label that the more chaotic songwriting...tunes like "The Almighty is Rising" feel like they take more random turns in pacing, and while this is occasionally obnoxious, it does at least reveal a mild sense of misdirection. Grief of Emerald were trying to break out of their box here, just not really succeeding so well...

The cover art was still insidiously lame, with some strange orgy of giant snakes and skull-faced nuns, but you could at least laugh at this one where the others were just too awkward to stare at for more than a second. It's all dowsed in fire and evil with crucifixes and stained-glassed windows for background, and that sort of showiness permeates the music itself, and the constant nagging organ tones being run off in the background but heavily crushed by the volume of the riffing force and vocals. Once in a while they'll fire off an exotic level of escapism like that melodic intro to "Those Who Bear the Mark" which hinges on some actual quality music, but for the most part Christian Termination tends to thrive off its cliched blasphemies and genre alone. That said, of the band's first phase (prior to the ensuing hiatus), this is hands down the strongest of the three full-lengths and might possess some limited appeal to fans who number mid-list Swedish black metal albums amidst their collections of Deicide, Krisiun and Vital Remains.