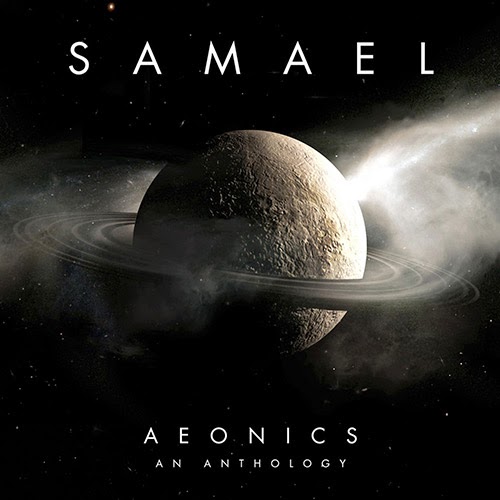 If Aeonics wasn't inevitable, then I don't know what is. Like other 'top shelf' metal record labels (Roadrunner, for example), Century Media has a history, especially over the last 10-15 years, of putting together anthologies of reprinted material to lure in suckers (i.e. listeners new to the band, or utter completionsts). They even tried to get me on the hook by visually stimulating the simplistic celestial body cover imagery that so worked for their masterpiece Passage. Of course, this is no simple cash in, on the very word of the label itself: This album is not a simple cash-in Best-Of CD, but a sophisticatedly and carefully arranged collection of musical milestones spanning SAMAEL’s entire career. The album contains 19 tracks (clocking for over 79 minutes), which as a whole transport all the uniqueness of this black & gothic metal pioneers. Sold, guys! I'll take two copies, in case I wear one out...

Sure, it comes packed with a big pictorial booklet and was assembled in collaboration with the band, but it's nothing more than songs picked off previous products, and in many cases not even working together in unison. For instance, I can't envision how their electronic/experimental stuff off Era One/ Lessons in Magic #1 necessarily fits in with the rest, being that it wasn't originally going to be put out under the band's name, and it's surely not going to give a prospective listener an accurate picture of what the band is generally all about. There are loads of amazing songs here, don't get me wrong, but "Moonskin" and "Rain" are best experienced with Passage, and the same goes for the rest. By taking and transplanting these few tunes from their original contexts you are almost teasing the hypothetical that they're 'best of', which is not necessarily the case for the Passage, Blood Ritual or Ceremony of Opposites material and these are all albums that need to be experienced in full to properly appreciate. Even Worship Him deserves that level of attention, so I feel confident in saying that Aeonics doesn't even have enough heft to serve as a door stopper.

It's also a missed opportunity, because instead of just squeezing a career anthology onto a single 80 minute disc, they could have had a 2-3 disc treatment, with perhaps an album of all the band's demo content, a live set, a collection of covers, electronic/symphonic remakes of older tunes (like the disc Xytras did of Passage without the metal elements), or even just remastered or recorded songs that bring the earlier, crude stuff up to speed with the latest material. Granted, purists tend to loathe such things, and I'm often one of them, but ANYTHING except photographer credits to exhibit that some effort was placed into this, some love for the band's fans, going above and beyond to give them something extra...a true and proper celebration of the Swiss band's career, which was, at least for the first decade and change, a truly wonderful and magnanimous musical evolution. But, no, we've got a product that might have just been some label intern randomly handed a stack of Samael CDs and told to pick out and randomly distribute tunes into an arbitrary track order that I assume was meant to fabricate some 'emotional' strength...but really doesn't anymore than my IPod 'shuffle' function. I do like the artwork and the booklet, its sleek and stylish and oh so metro-Samael, but what if this had just been a new album, dropping the 'subtitle' of 'An Anthology' and presenting us with Passage II (they'd do this later, but one can imagine). Anyway, enough of my pipe dreams...if you have any intention of buying this, strike yourself in the temple hard with a blunt object. Otherwise, I shepherd thee back to sample and/or purchase the first five albums and leave it at that.