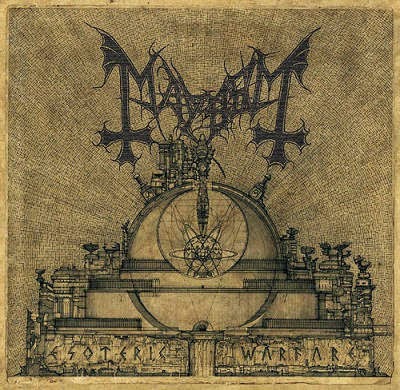 Esoteric Warfare is an interesting amendment to the Mayhem canon, a valiant effort to bridge the suppressed atmospheres of its predecessor Ordo ad Chao with the razor hewn traditional Norse black metal riffing the band helped pioneer through seminal works like De Mysteriis dom Sathanas and Grand Declaration of War, or perhaps most accurately the Wolf's Lair Abyss EP that so many seem to forget about. To that extent, I would consider it a mission accomplished, only with the caveat that I ended up finding one half of the equation a lot more compelling than the other. This is very likely my least favorite of the band's full-length works, but it does what a Mayhem outing should: dowse you in its evil clutches and remind you exactly who your Daddy is. And that's fucking Satan, if you have to ask.

But here, through Esoteric Warfare, the Norwegians channel the author of all sin through a curiously nuclear/dystopian theme which pervades the lyrics and artwork, like this unholy union of the Cold War and their creepy occult roots. It's hands down the most fascinating component of the record as a whole, followed by Attila Csihar's performance, in which he's whispering, mouth breathing, gargling, growling and otherwise sounding like his basic, decrepit, creaking-wooden-stairs self. Generally his more resonant and catchy lines come during segues from the faster action, and this is where I found a little disparity in the quality of what I was hearing. The muted, tremolo picked black/death patterns which drive the ferocity of the effort are sort of a bland strain of earlier Mayhem (Chimera, Wolf's Lair Abyss) with classic Morbid Angel, punctured and punctuated by slices of brighter, dissonant chords and partial arpeggios that were common fare for much of the Scandinavian black metal output of the mid through later 90s, or a faint few zipping, hypnotic lines cut through that remind me of the German band Endstille. Emperor and Satyricon also come to mind, but more directly these guitar progressions paired with the caustic, mechanical nature of the songwriting evoke Snorre W. Ruch of Thorns, Aborym, or Dodheimsgard's guitars in the techno-infused 666 International.

That's far from an unwelcome aesthetic, but unfortunately so many of the patterns just whip into the first frenzied patterns the guy can seemingly slide across on the fretboard, without much thought put into anything, and they become increasingly predictable as a footnote for an intense, agile Hellhammer performance which I found infinitely more interesting just on its own. Granted, the abbreviated leads and the higher range chords often sound efficaciously malevolent, and oftentimes clinical enough to match the album's lyrical style, but I'll be damned it there were more than a handful of fingers worth of rhythm guitars on the entire experience that I wasn't bored with. Most are just too predictable, and it gets to the point that even the primal, slow chugging in a tune like the unusual "MILAB" grows even more fresh on the ear. Speaking of which, that is one of my easiest favorites on the album, with its spidery bass lines, dissonant and disheveled architecture and really grasping the full range of Csihar's vile, filth smeared, unique presence, and ditto for "Posthuman", which captures an almost minimalist Voivodian atmosphere (not the only case here) until the noisy blast breaks; suitable for an album that many might describe as PostMayhem.

So I was really leaning towards these less structured moments on the album, and whenever they burst into another stock deathened black riff I just found myself phasing out. Maybe this was intentional, or maybe it's that the new guitarist Teloch was channeling a bit too much of his alma mater Nidingr, which has long thrived on this very same style of riffing, sometimes to its detriment. Either way, it gradually de-escalated my initial appreciation for the record's grimy intensity to levels of a more lukewarm reception. The production here is also pretty threadbare and dry sounding, which on the one hand makes much of the procession clear to the ear, but on the other doesn't exactly help give the rather averagely scripted rhythm guitars much meat or impact. I liked most of the lyrics (except perhaps "Pandaemon" which is just a shopping list/incantation of the names of various devils, demons and idols through religious mythology), and Csihar is just all over this, truly the Mike Patton of black metal. But apart from the themes and the potential of what Mayhem might have created within this wasteland of post-apocalyptic vision, I only ever found myself semi-satisfied. Never truly impressed.