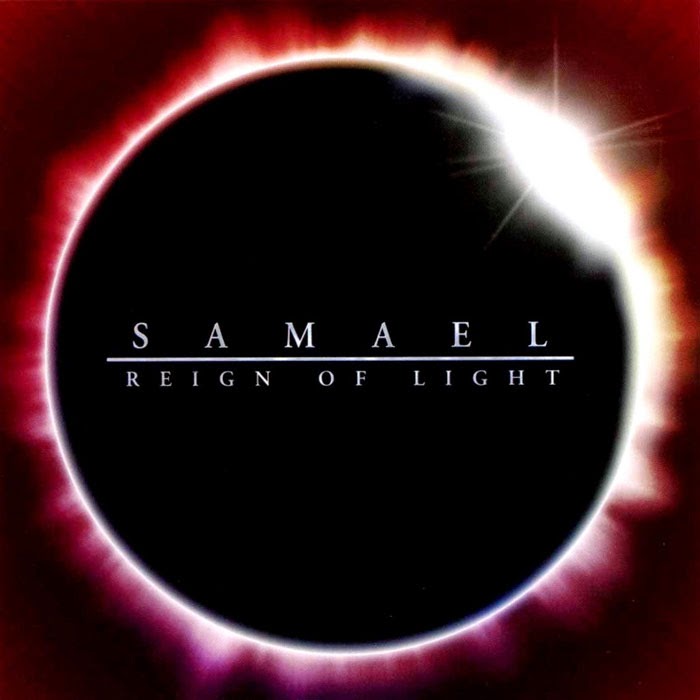 There was a brief window of time in which I had convinced myself that Reign of Light was a great follow-up to Eternal, Samael's first foray into a more uplifting, poppy and dare I say 'Romantic' sound which further distanced them from the occult roots of their primal, nasty black metal origins. Thankfully, I was deluded only for a few shorts months as the record began to almost immediately flake off its replay value, and then the forest was seen for its trees: Reign of Light is an attempt to take the ideas presented on Eternal to a more accessible level by ramping up the production standards (one of the few iffy traits of its predecessor), imbuing the music with a more overtly techno/EBM presence redolent of early 90s KMFDM, and, at least for the most part, dumbing down the lyrics and guitars to the point that they seem fixated on pandering to a Euro Goth metal crowd who was still willing to accept the band after they had long since begun to shed the underground black metal fans who represented their original audience.

I'm not going to say this is totally shit, because there are a few saving graces here or there that render it a pretty harmless effort, but when I look back over the Swiss band's career, this is the full-length I am least likely to ever reach for on my CD racks. In fact, I sold it a few years after it was released, when living space started to trump my completist/collector mentality. By and large, though, this is an album where the band had seemingly reached the creative end of their evolutionary cycle, morphing into something akin to a caricature of the albums preceding it, and having very little new on the table apart from the slightly unwelcome (or rather unsuccessful) endowment of cheap electronics and the attempts at exotic, Middle Eastern and Southeast Asian influence to some of the guitars and synth lines, prominent in tunes like "Telepath", which are structurally the highlights of the album but do suffer from some poor compositional choices and goofy lyrical delivery. And those are really the two major banes of Reign of Light as a whole: lots of mundane muted guitar passages representative of the second rate industrial metal of the 90s and the Neue Deutsche Härte dance metal that Germanic bands like Rammstein were capitalizing on. Samael was always predisposed to fail at such heights due to the snarled, strange vocals of Vorphalack, so it's almost pitiful to hear them try...

A lot of the tunes are meant to make you shake your ass at the club, which would be fine if they somehow stuck out to memory, but sadly that takes the form of transforming the glorious synth tones so resplendent on records like Eternal and the immortal Passage and then applying them to these pumping beats and vocal lines that occasionally seem so ridiculous that they fall out of meter when Vorph tries to wrap them around the drums and keys. A few songs here, like "As the Sun" are outright fucking embarrassing...like early 80s Olivia Newton John workout videos given a grimy EBM spin with the nihilistic rasping of the deranged Swiss man. I'm not necessarily averse to such contrasts, having played for awhile in an industrial/extreme metal hybrid band where I'd growl over late night radio house synthesizers or such, but those were usually tongue in cheek situations; whereas Samael is dead serious, seemingly unaware of how absurd they sound. You see, the reason why this record became such a quick 'sinker' is that it does actually have a few clever guitar riffs, at best recapturing that universal, unusual industrial metal warmth of Eternal, but when you break everything down, there are probably only 2-3 tracks worth sparing, if we could somehow change the lyrics...

Yeah they are pretty uneven here. I was willing to buy this newfound, smug, life-embracing happy happy Samael for one record, and one record only, but here it just becomes ridiculous on a cut like "On Earth" where they ramble off a long list of cities (presumably those where their fans reside) and attempt to bind the entire human race together in an orgy of sentiment. So, like that awful scene in the Matrix sequel where the Zionians were having a vast, multicultural passion-rave of release, all colors and ages of bodies roiling together in the sheen of aspirant supermodel sweat. Only the Fluke tune during that scene was far better than this song or really anything on this album. It's just fucking goofy, man...what happened to the "Jupiterian Vibe" or "Baphomet's Throne"!? I mean you know a band's running out of ideas when the lyrics consist of a series of 'shout outs', and there are all these other songs about 'our vibrations' and 'our souls' and how 'we keep growing' in our new world and all this other ambiguous philosophical pap that sends the hearts a-flutter, or in my case the heart a-shitter. Fuck, "Reign of Light" itself has some of the most cliche and excremental lyrics you'll ever see in posi-metal. Perfect for those who think Theater of Tragedy's electro hardpop records were anything more than catchy club rock (to be fair, those were really damn catchy...this is not, at least not often).

The cleanliness of the mix only serves to make Vorph sound even more goofy when singing a lot of these, whereas Eternal had the smokescreen of sounding a bit more raw and spacey, and Passage was brilliantly poetic, angry and humanistic. This is not a disc entirely void of its hooks, and I like a few of the guitar melodies as they appear in the bridge of "Moongate" or the "Jupiterian Vibe"-like "High Above", which alongside "Telepath" represent the trio of highlights here. The ethnic female vocals are put to sparse, decent use and the mix of programmed drums, multiple atmospheric levels of keyboards and guitars are very evenly balanced, but really even the best songs seem like retreads of the songs on the two albums before it, only friendlier for the whole family. Half the material is just as corny as the vocal-half of the Era One/Lessons in Magick #1 double-album which was released later by Century Media (but written around the same time as this material). And, really, if any of this sounds even remotely interesting, just go straight for its successor Solar Soul, which has a much harder hitting guitar presence alongside the vocals, but still features the same fancy for the exotic, Eastern synthesizer lines while feeling slightly less awkward overall.