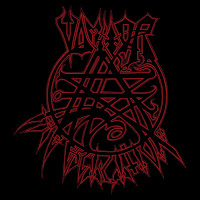 Australia's long been a haven for raving metal madmen, much as it has been for brutal cult film like Razorback and the Mad Max series. I mention these, because Vomitor has always struck me as a group of barbarians reared on both this 70-80s cinematic extremity just as much as the fundamentals of death, thrash, black and speed metal, all of which they pulp together into a whipcord of frenzied, raw energy and Teutonic inflected riffing circa Sodom, Kreator and Destruction (in addition to Slayer, Hellhammer, 80s Morbid Angel and Possessed) in the early through mid 80s. Denim, vests, helmets, bullet belts, beer, patches, this is the archetypal band of retro maniacs who, rather than just endlessly aping riffs and production, do try something mildly different with the joint petulance of their production values and the sinister intentions exacted by the nasty vocals, frilly leads, etc. It's not hard to reason why their prior efforts like Devils Poison generated the buzz they did, and Vomitor is surely a fine fit for the crowd enamored of Hells Headbangers, Nuclear War Now! and related labels who specialize in this field.

It's also no surprise that these sickos (past and present) almost all have history in other Down Under deviants like Gospel of the Horns, Spear of Longinus, Portal or the seminal Bestial Warlust. The writing is not exemplary, perhaps, but it is incredibly seasoned mischief that never sounds insincere or trying to take the piss out of the genres it celebrates. I realize the band is generally labeled as a death/thrash hybrid, but the bloodied, Mille-like barks and unwashed savagery of the presentation also reek of Mayhem's Deathcrush era or a few of the earlier Bathory records. The guitar tone here is crisp, crunchy, and never obscured in the mix, but at the same time it's light and primitive and just about perfect for both the churning grime of the slow to mix paced chords and palm mutes, to the more harried and intense picking sequences that drive pieces like the opener "Pitch Black" or "Hellburst to Fight". When they pursue a more melodic progression of notes, they always pop out of the mid-toned backdrop like vulture cries, and the leads are generally interesting developments no matter how dissonant, incendiary or frivolous the patterns. Drums have a very live feel cast about them, with the kick set at a tolerable level and lots of crash to the fills, and the bass, while audible, has a thinner tone that allows the guitars and vocals the center stage.

I love the effects placed on the crude, barking vocals which help them feel like echoes across a traumatized, irradiated wasteland. Malevolent desert ghosts, stalking any mutant who survived the fallout. These guys are also capable of building intensity to the point where it becomes like an ungodly offspring of Repulsion and mid-80s Dark Angel, but then they'll simmer down into some less overbearing material for a swell contrast ("Horrors of the Black Earth"). Despite its wilder embellishments, The Escalation is focused and concise, with about 31 minutes and 7 tracks (with an intro), and never grows boring unless you're just not in the mood for such a rough handling. True, the songs don't really stick out in my memory for much longer than when I'm listening to the disc, but they easily stoke the hell-hearths of nostalgia for that crucial time when a lot of bands were branching out, and the borders between the thrash, death and black genres were somewhat blurred, with no one in a rush to define them to the exclusion of all others. A fun, consistent record which easily affirms their place among the better groups in this niche, safely recommended to fans of Pleasure to Kill, In the Sign of Evil, Darkness Descends, Hell Awaits, Altar of Madness, Seven Churches, as well as newer outfits like Cruel Force, Antichrist, Ketzer, Deathhammer, etc. Thunderdome cage metal.