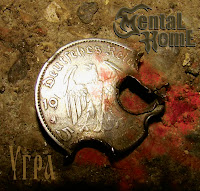 I have to say, of all the reunions and comeback records I've heard this year, Mental Home's Угра ('Ugra') was perhaps the least expected. Not because the Russians ever called it quits permanently, but because I neglected to notice the single/teaser they dropped last year, and after the diminishing results of their last album Upon the Shores of Inner Seas (their third on and last on the End Records, and first and last to get US distribution through Century Media), I did not think I'd be hearing the band again in a studio capacity. Yet here it stands, the 4th full-length, with most of the members returning from the 90s (save for the bassist, who is replaced here by 'Serpent' from several other Russians acts), after a 12 year hiatus...

This is a self-released album, and it bears the distinction of being their first entirely in Russian (with a German concept, if the cover didn't tip you off). Not only that, but the melodies and riffing structures really seem to conjure idealistic images of their homeland, from its vast history to its architecture; something I've always enjoyed in their music. Right away, the band has returned to the symphonic/melodic doom stylings of Vale and Black Art, their strongest statements, and abandoned a fraction of that fruitless progression from Upon the Shores...which I found to be quite a disappointment from its predecessors. The guitars are bulky, accessible and heavily based in simplistic melodic riffing, and they've not lot any of that huge polish circa Black Art. 'Maiden' Smirnov continues to orchestrate the group beyond the normal parameters of their rock instrumentation, and he often leads off tunes like "В среднем течении.. (In the Middle of a Stream)" or "Берёза, яблоня, рябина (Birch, Apple, Rowan)" with both eloquent and (somewhat) cheesy synthesizer pads that are not likely to win over those who loathe keys in black or doom metal. All told, though, these are pretty catchy tracks that offer up similar motifs to Black Art with perhaps a few breaths of progression that hint of a band not simply interested in retreading old steps.

One difference is that Sergey's vocals here feel a lot grittier and harder hitting than the prior albums, even if the style and tonality are largely the same. Combined with the native lyrics, this might be one element which could turn off fans of the earlier work, though once you settle into its rougher contours it continues to fit the music quite well. Drums, bass, piano and clean guitars are all top notch quality, and Угра is varied and well-paced across 46 minutes. So seasoned and consistent in quality, in fact, that it really does not feel like much time has lapsed since their 2000 effort. Mental Home has always been, and continues to be one of the more distinct bands in this field, implementing a layer of ethnic immersion into their notation which you're too rarely going to find elsewhere. I was also impressed that they capped off the disc with a Lake of Tears cover ("Raven Land"), sped up a little and sung in Russian. Not because it was as cool as the original, but just that they had the good taste to try such a thing and make it their own. Ultimately, Угра isn't quite so infectious as their 1996-1999 works, but nevertheless this is a good listen and a welcome return to what so compelled me towards their music in the first place, with a sound all to themselves that should sate fans of Gothic/doom metal who don't shy away from the language barrier.