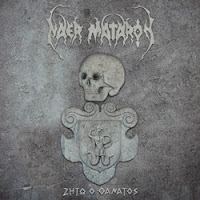 Long subsisting on savagery, Naer Mataron have unquestionably proven themselves to be one of the most sinister extremists among the cult of Hellenic black metal. One of the closest in that scene to adhere to the concept that this genre's roots are raucous, fast, unhealthy, unholy and uncomfortable music to damage the psyche and soul. Their records have traditionally not been the stuff of glorious gallivanting and singalong melodies, but more interested in skinning the audience and cannibalizing their organs, and their latest, sixth full-length ΖΗΤΩ Ο ΘΑΝΑΤΟΣ (i.e. 'Long Live Death') is a further affirmation of their scathing Satanic blood ablutions and the organ harvesting of an angelic chorus. Now just a three piece (they were five on 2008's Praetorians), one would think that they might pursue a more stripped-down approach to violence, but that's not really the case with this...

To my surprise, Naer Mataron have actually ramped up the death metal elements in their music to the point that this latest album is basically a death/black hybrid. Granted, the last album had a bit of this felt through the construction of the muted picking and several of the riffs, but the vocals there were more of an abrupt and uncouth snarl placing it largely in the latter niche. Here, we get denser death grunts, which combined with the hyper-accelerated riffing bring to mind veterans like Morbid Angel, or Polish acts like Behemoth or Hate. Rhythmically they continue to implement a lot of dissonant, cutting chord patterns which reflect their Norse black metal influence and the heritage of their earlier records, but this is a blasted, brutal assault which will potentially sate followers of both camps (or each, individually). Frenetic, tireless drumming lays out the groundwork, and above the clamorous configurations of chords you get zipping, unhinged leads that feel as oblique and evil as the Floridian forefathers, if perhaps not as complex or interesting as something Trey might have written in his prime. But fear not, because this isn't some monotonous blast-fest lacking in variation: they use a lot of great rhythmic tricks, stop/start patterns festooned in spikes of morbid melody (as heard in "Sleepless Beings"), and even some rabid, turbo-thrashing riffage as in "Faceless Wrath of Oblivion".

The mix of ΖΗΤΩ Ο ΘΑΝΑΤΟΣ is murky without being muddled, and you can hear each course being carved out by the frenzied guitars in a strong balance with the kick, bass, and grunts. Perhaps the least compelling components of this new focus are the guttural vocals, which simply don't offer much of a distinction among hundreds of like-minded death or death/black outfits; and the bass-lines which maintain the presence of a rumbling hell-train beneath the abyss, but primarily get lost behind the guitar flurries. But to be honest, I can forgive cases, since Kaiadas does not do a poor job with either, and never has (cut the guy some slack, he's an actual elected member of parliament in Greece for the Golden Dawn). Ultimately, Naer Mataron prove that they 100% have the chops to succeed in this field, and if songs like "Whispers of Begotten Premonition" or "Sleepless Beings" are any indicator, they've gut the raw intensity to sate fans of death/grind or brutal death without alienating their core black metal audience, and hell, the title gave us plenty of warning, right? It's not amazingly memorable, but we've got a pretty fucking explosive album here; despite its mutation away from the sound of their first few discs, it's just as good as efforts like Up from the Ashes or Discipline Manifesto.