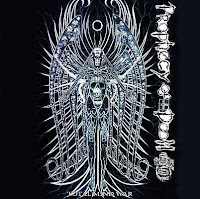 Definitely among the more obscure bands in the British underground in that crucial late 80s/early 90s death metal wellspring, Prophecy of Doom are ripe for the sort of treatment this Total Mind War collection offer us. Prior to this, my only exposure to the band had been their full length debut, Acknowledge the Confusion Master ('90), a pummeling abomination which might have found its way into the mitts of many a Napalm Death, Carcass, Bolt Thrower or Godflesh fan if only their nets had been cast a little wider. Crude in execution, to be sure, but in these times of mining the underground forgotten, I could see a lot of younger fans falling for its authentic fusion of leaden, busy grooves and over the top, gruff scowls and blunted barks.

Total Mind War is not a new recording, but rather a pairing of two of the group's demos, the Second Peel Session (1991) and Ego Death Grind (1996). At a half hour playtime and 7 tracks (some of which are redundant with the band's two studio albums), it's hardly a substantial tour through Prophecy's past, nor is it an unwarranted criticism that it feels incomplete when there were numerous other antiquities (demos, EPs, and split material) that might have been added for a better sense of completeness. That said, you never know with these things, there might be licensing issues or member disputes that preclude such an effort. Certainly the songs here are great representations of the band's style, though one will have to accept the demo level production here which is marginally less clean than what I recall of Acknowledge. Thick, punishing guitars weave dirty grooves that lie somewhere between Symphonies of Sickness, Realm of Chaos, Harmony Corruption and Disharmonic Orchestra's Expositionsprophylaxe in structure. Not exactly complex, but certainly busier than your stock chord progressions inherent to so many death/grind or death/doom acts of that era. The drums are taut and tense while the bass has a muddy, pervasive air about it that looms off in the near distance.

But the real standout for Prophecy of Doom was the vocal presence of 'Shrew', which felt like a more garbled alternative to Barney Greenway or Karl Willetts sauced in these grim, echoing effects which are incredibly ridiculous but at the same time: entertaining. Even where the riffs suffer from a bit of a blander note progression, the swerving swagger of the emboldened bass and Shrew's inflection really take this to another level, as does the presence of the spacious ambient swells in the midst of Ego Death Grind tracks like "Protogenesis", easily my favorite on this compilation. You'll definitely hear those hints of death/doom on the latter demo that started to creep into the band's sound through the 90s, as they slowly drifted away from the grinding roots. Lyrically, the Brits were fairly political and technological, mirroring several of their peers like Napalm Death or Deviated Instinct, and well scripted from what I can recall of the debut album.

Ultimately, though, Total Mind War is going to appeal most to those interested in collecting such gems who have never owned the content. As I said, a few of these cuts did appear on the full-lengths, the first of which would probably be the best intro to new fans who can find it; but this is probably the best place for tracking down Ego Death Grind. In terms of quality, Prophecy of Doom were not the most memorable writers, surely, and yet I think there's something charming about their style which might appeal to old school bloodhounds that are tired of the same old cavernous Autopsy/Incantation advocates, or the xeroxed Swedish blueprints. This band and these songs were very indicative of a scene long abandoned (though its chief practitioners still attract a large following), and the combination of raucous vocals, sludgy death riffs and the maturity of the later content here lead me to believe these guys were capable of bigger things.