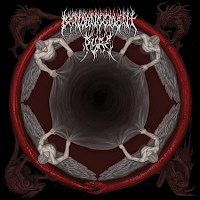 If 2010's World Cremation was the right hook pummeling you to the arena mat, then Almighty Arcanum must be the pinning maneuver, because it more or less takes everything I enjoyed about that album and fleshes it out into a more appreciable set of songs that had me straining my neck in bestial, barbaric deference. Like the last album, the worst I can ever say for Denouncement Pyre is they lack a real sense for creativity or innovation, but when you're having as much fun as you will listening through these tracks, then that shouldn't prove a hindrance in eagerly recommending this to the followers of groups like Deströyer 666, Marduk, (90s) Enthroned, (late 80s) Bathory, Angelcorpse, Bestial Warlust, and other purveyors of comparable, cacophonous, blitzkrieg bombast.

This is a fast record, but not to a fault. Blasting sequences are measured out against slower, warlike segues where the drums are just as intense, like artillery treads about to crush a few hillocks of human bones. As with the prior album, the band accrues more black metal brownie points than death (for a hybrid), but you can feel the presence of the latter medium through the more robust, growled vocals. What separates the Australians from a number of similar, savagery-borne outfits who try to thrive on simple formulas of blasts and tremolo patterns is that Denouncement Pyre fuse a little more atmosphere into even the most standard numbers like "An Extention of the Void" and the eerie keening behind the meaty bridge riff; or the slower, ominous riffing of "The Deceiver". That said, they truly shine when they barrel forward through pieces such as the titular "Almighty Arcanum" or the superb, driving "Circle of Serpents". If you're not throwing your horns at the abyss within about :30 of the early riffs in these, then you're probably late for Communion, clearly in the wrong place. Almighty Arcanum is not filled to the bloody gills with excellent, memorable rhythms, leads, or transitions, but it's entirely well put together, a noteworthy opus of infernal craftsmanship.

Much of this can be attributed to the emboldened, incendiary production, which transforms what might otherwise be the most banal of riffing sequences into a poignant discharge of bright, intimidating anger. The drums and vocals sound great, but the guitars have an exemplary mix whether they're surging along in some black/thrash configuration, twisting into a vile tremolo picking, or a more solemn, crushing abrasion. Bass is not too much of a standout in terms of adding depth and dimension, but you can still hear it plugging along somewhere, and it doesn't detracted from the dominant guitar seated above it. The vocals of Decaylust (aka 'D) aren't exactly novel, but they're abusive enough, and I like the wavering fountain of vomited blood he invokes on the sustained notes. All told, Almighty Arcanum is an impressive, smash-up job, even if the pale quartet on the cover seem like they've turned their ouroboros into some hellish trampoline. Plenty of seething bursts of Satanic celerity here to counteract the occult mortar-shell certainty of the mid-paced fare, and if you ignored them the last time they put out an album (a good one, I might add), it'll be a little harder in 2013, since Denouncement Pyre will piss demon-spunk all over you.