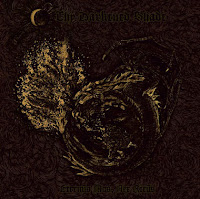 Guitarist Semjaza is quite a busy man of late, writing and performing with a number of Greek black metal acts including Acrimonious, who have just released a strong sophomore album, and the leather bound wildmen Nadiwrath, whose debut dropped last year. More impressive than either of these, though, is Thy Darkened Shade, a project formed in the later 90s which has long since been silent, until word was dropped that their debut album would be arriving through World Terror Committee. And quite an exciting record this is, kicking its tired niche in the ass with a vicious precision, ample turmoil and riffs flying by a thousand miles per second like a razorblade tornado above which the rasps beckon like maddened carrion birds awaiting the human carnage in the storm.

Definitely getting that late 90s Scandinavian black metal vibe once again, which a good number of Greek groups have adopted over the past decade rather than follow in the footfalls of their more distinguished, renowned countrymen like Necromantia or Rotting Christ. This isn't a bad thing, of course, since most of the world has similar influences; and it's also not really a surprise if you've heard Acrimonious, Acherontas, or Ravencult. To their credit, Thy Darkened Shade really get it right. The lashing maelstroms of tremolo guitars are adorned with a lot of higher string dissonance redolent of groups like Emperor, 1349 and other Nordic varieties, and they also like to burst into these excellent black/speed or black/thrash progressions which are like a ramped up Aura Noir (in "Reconstruction of Soul and Matter", etc). Blast beats are meted out effortlessly and there's definitely a lot of forward thrust through most of the songwriting, though a few pieces like "To Suffer the Perpetual Curses" slow things down and incorporate atmospherics like keys to break the rabid pace. Songs are all pretty average length, around 4-6 minutes, but within these margins you are generally due for at least a handful of exciting guitar riffs and a reasonable level of internal variety.

The mix here is cutting and uncomfortable, without a lot of natural low-end, and I wasn't too impressed with the bass overall. Then again, this is generally par for the course on an album of this sort, once again in league with the ferocity of the Swedish and Norse influences. One area I feel the group could improve is in the vox, which are competent enough as they appear, but lack much variation against the far more exciting music. I believe some shrieks or just a sharper delivery would work wonders to compensate, but certainly I've heard a lot less inspired and enthusiastic rasping elsewhere than what 'The A' and Semjaza are retching out here. Otherwise, Thy Darkened Shade is intense, entertaining and admittedly quite pissed off, and I've come away from this debut numerous times feeling that same scathed sensation which bands like Marduk and Impaled Nazarene were delivering about 15 years ago (though this is a bit more technically inclined in terms of its structure). Eternvs Mos, Nex Ritvs is frankly one of the more promising Hellenic assaults I've come across lately, alongside Spectral Lore's Sentinel and Acrimonious' Sunyata.