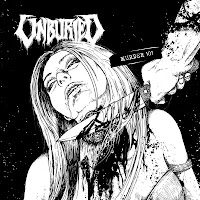 As open minded of a guy as I am, with a vested interest in many genres of music and especially sub-genres of metal, every now and then there's a release which comes along and gets under my skin: and not in a good way. Unfortunately, for Virginia's Unburied and their sophomore outing Murder 101, this was indeed the case, and I found it torturous to sit through this the acceptable number of times that I usually take to fashion my observations into a written opinion. Now, let me clarify first: this was a band from another age, formed in the 90s, and some of their primitive approach to brutality carries through from this simpler time period. I have no real issues with music of such a neanderthal nature, nor can I persecute Unburied for its heavily misogynist lyrics and themes (let's just say the cover is indicative of a lot of the album's inspiration). Cruelty of this nature is a common trope among many brutal death & grind acts, and if you're not used to it by now...there's always brostep? Granted, the band themselves might not hate women, but this album most definitely fucking does. Murder 101 does not pull any punches, and some will appreciate such defiance.

The album is being branded as death metal, and certainly that's a large part of what's going on, with some faster based riffing segments, old school chugging, and a production on the guitars that definitely reminds me somewhat of that old Morrisound tone so popular among Floridian bands of olde. That said, I also heard a lot of hardcore influences in the leaden, unflinching simplicity of the groove riffs, and especially in the gruff lead vocals, which have a sort of  thuggish inflection I equate with East Coast bands like Sheer Terror or Blood for Blood from the 90s. This isn't necrophiliac gore & guts, but more of a wifebeater brand of death metal which attempts to deliver maximum punishment through minimum riffing. And this is where my major issue with the album comes in: the note progressions almost 100% suck. Seriously, such dreadfully mediocre patterns in the breakdown riffs that they're often just two chords bouncing back and forth ("Trapped in a Delusion" and the title track "Murder 101" are two offenders), preschool punishment that I wouldn't find funny or interesting if I were to assume even the most ironic stance. In the band's defense, the aforementioned tracks are some of the worst here; others pummel along with a lot more intensity...

...and yet those, too, are incredibly underwhelming in construction, even in the most clinical thunder-chug thrashings of "Heartless Corpse Defilement" or the uppity punkish chord configurations embedded into the song "Witchburner". Not a single damn riff sequence on this entire 30 minute album was remotely compelling, and there's really no compensation anywhere. Not in the banal, predictable NYHC meets NYDM grooves, nor the spurious use of samples. The drumming is decent enough, with a nice slappy snare sound that functions adequately against the broiling guitar, and the bass guitar has a nice pop to it which reminds me of NY thrash bands like Anthrax, but neither is performing anything interesting enough to ignore just how vapid a reaction I had to the riff set. It's not the worst album I've heard by a long shot, and the band at least keeps the tracks concise enough that they don't drag on forever. They showed up, and they played. I guess in the end, I get what Unburied were trying to pull off here, a totally stripped down return to their roots and a total 'I Don't Give a Fuck' attitude.  An approach that might warrant some consideration elsewhere, but I really think it would leave a bigger impact with better plotted songwriting. Wasn't my thing.