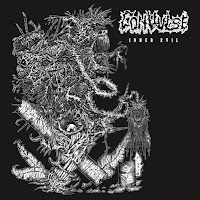 Convulse is another case of an early death metal act which has, in the wake of a long-term absence, developed an enormous following due to the fact that their debut, World Without End hits all the right notes with the latest generations of fans seeking out the crushing, atmospheric, authenticity that used to run rabid in the genre during the earlier half of the 90s. One could certainly not argue that the widespread proliferation of the internet has bolstered the Finns' audience, and the cult tatters of legend status began to circulate around their name. Fast forward 18 years after their more divisive sophomore Reflections (which saw a marginal shift in sound) and we've got the inevitable reunion material, and already I've seen a number of early listeners citing disappointment...

Yes, you guessed it: these new tracks are not EXACTLY World Without End 2.0, but really, what would any sane individual expect? Convulse was a group which had already moved on from that precise aesthetic before embarking on their nearly two-decade hiatus. To their credit, and to the relief of many who will hear this with fresh ears, I think the Finns have done a pretty damn good job of updating their old sound. The fundamental songwriting here is not at all unlike that of those formative years, and the major differences come in terms of production, which feels cleaner and perhaps a fraction less ominous than the debut. Otherwise, the guitars still have a lot of that sodden groove to them, sullen lapses into death/doom sequences, and ruddy streams of mutes which still churn, even without that muddy and swamp-like tone of olde. Coupled with evil, archaic death metal melodies (like those late in "Inner Evil" itself) or the brute, brunt gutturals of Rami Jämsä, the EP absolutely recycles its ancient inspirations, both musically and lyrically. Hell, "God is Delusion" is more or less a spiritual successor to the title track or "Godless Truth" from World Without End, and it remains pretty clear: you won't be meeting with these dudes at Bible Studies on the next Sabbath.

I did feel that there was a small gulf here between the quality of two tracks. "Inner Evil" is the more direct and pummeling of the pair, but I felt the more atmospheric fulfillment of "God Is Delusion" was superior, from the great acoustic intro to the somber, mourning melodies which permeate its slower hooks. The latter simply sticks with me longer. Once in awhile the band will pull off a riff or two which just doesn't seem all that interesting, and overall there is not a whole lot of creativity here, which I would think might actually satisfy a certain portion of the purist audience who want their death delivered with no frills, dressings, or progression. But ultimately, I thought these two tunes were above average, keeping me interested at least past a few spins. The bass is fluid and fragrant with the din of rot-blossoming corpses, the drums keep a great pace with some really organic fills and primitive blasts for the faster sequences, the guitars rich and chunky. The vocals are a bit monotonous but to be truthful I felt this way also of their debut. Fitting to the tunes, but a bit more character and less predictability would enhance the experience.

I feel like I had a reaction to this EP comparable to how I felt about the latest Incantation full-length, if not nearly so positive or pronounced: it's the same band, only tidier and more matured through the seasons, but they're still playing the music true to themselves. If Convulse can create a proper album with at least this level of songwriting, I don't see how that could be a bad thing, and supporters of that old Finnish axis of evil which also includes Demigod and Demilich should not be too turned off. Decent stuff.